Shakira is getting in some much deserved rest and kisses from boyfriend, Gerard Piqué after her exhilarating Super Bowl halftime show. The Colombian singer, 43, and the professional soccer player, 33, were photographed showing off some PDA on a soccer field in his native Barcelona on Sunday. The longtime couple was joined by their two sons, Milan Piqué Mebarak, 7, and Sasha Piqué Mebarak, 5.

Shakira and Gerard were pictured lying down on a blanket in the grass during the sweet family outing. The Grammy-winner and the athlete showed off some PDA when they shared a smooth right in front of an open soccer goal. Meanwhile, their two boys sat nearby as they enjoyed the sun and the outdoors.

Shakira, who is known for keeping her personal life private, was dressed casually in a dark puffer jacket, sweats and sneakers. The “Hips Don’t Lie” singer, who let her wavy hair down, donned a cute pink beanie hat. Gerard sported a grey long sleeve shirt and sweats, with a fresh pair of Nike’s. Their sons were also dressed in comfortable clothes that were perfect for playing outside. 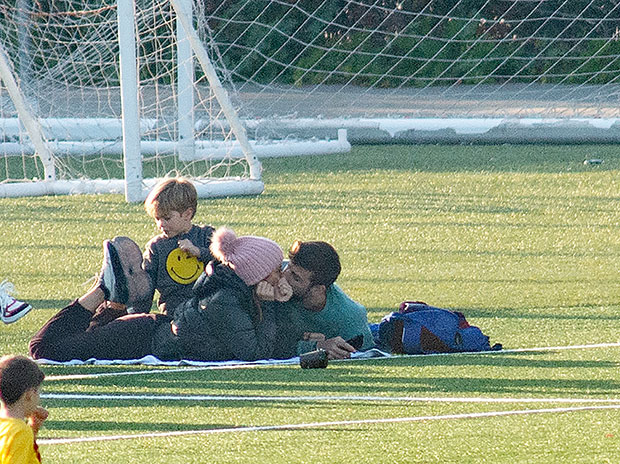 Shakira and Gerard Piqué with their sons, Milan and Sasha at a soccer field in Barcelona on Sunday, February 9, 2020. (Photo credit: MEGA)

Shakira and Gerard have been together since 2011, having first met in the spring of 2010 on the set of her “Waka Waka (This Time for Africa)” music video, in which Gerard starred in. The track served as the official song of the 2010 FIFA World Cup.

Following the release of the video, Gerard and Shakira stirred up romance rumors after they were spotted out together on a few occasions. Yet, it wasn’t until March 2011 that Shakira confirmed their romance in a sweet post on Facebook, alongside a smiling photo of Gerard, who wrapped his arms wrapped around her waist.