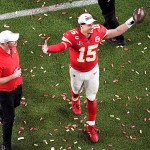 Kansas City, here come the NFL champions! After defeating the San Francisco 49ers to win Super Bowl LIV, the Kansas City Chiefs are about to celebrate with a victory parade, and here’s how you can watch.

After an explosive fourth quarter that saw them come from behind to win it all, the Kansas City Chiefs are about to bask in the glory of their Super Bowl LIV victory. The NFL champions – including the history-making MVP Patrick Mahomes – are about to take the Lombardi trophy throughout Kansas City, Missouri, and celebrate their win with their thousands of fans. The Kansas City Chiefs’ victory parade, taking place on Feb. 5, kicks off at 12:30 PM ET / 11:30 AM CT. For those who can’t make it down to Kansas City, both the parade and the rally will be broadcast live on KSHB-TV Kansas City and NFL Network, while a live stream will be available on NFL.com (per Newsweek.) Update: The Washington Post has provided a live stream above.

“For the first time in 50 years, our Kansas City Chiefs are bringing home the Vince Lombardi trophy, and we’re all excited to celebrate with our players and fans,” Kansas City Mayor Quinton Lucas said in a statement. “We will cheer on the World Champion Kansas City Chiefs this Wednesday morning during our victory parade through downtown Kansas City. Thanks, Kansas City, for being such a great city and having such amazing fans!” Following the parade, a rally will be held at Union Station (scheduled for 1:30 CT / 2:30 PM ET). Considering the turnout for when the Kansas City Royals won the World Series in 2015, plan to get there soon. An estimated 500,000 to 800,000 people turned out to cheer on the Royals. Considering that this is the first time the Chiefs have won the title in half-a-century, expect just as many dedicated fans to come out and party.

The Chiefs have a reason to celebrate. It was a hard-fought Super Bowl LIV. At one point, the Chiefs found them trailing the San Francisco 49ers by 10 points, but quarterback Patrick Mahomes – who went 26 for 42 for 286 yards that night – helped put up 21 unanswered points in the fourth quarter. By the end of the final whistle, the Chiefs had claimed victory, 31-20. Mahomes was awarded the MVP, and at age 24 (and 138 days old), he became the youngest player to win both an MVP and Super Bowl title and the youngest to be named Super Bowl MVP, per NFL.com.

“We never lost faith. That’s the biggest thing,” he told FOX’s Chris Myers. “Everybody on this team, no one had their head down, and we believed in each other. That’s what we preached all year long.” Afterward, while on the postgame dais, he gave props to the Niners. “We weren’t executing at a high enough level, and you play a defense like that, you’re not going to have much success … I’m just glad our guys kept fighting, and we found a way to get it in the end.”