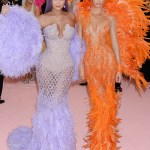 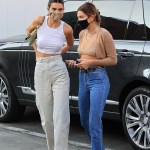 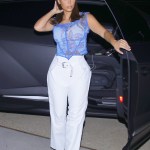 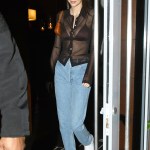 For Kendall Jenner, ‘casual’ still means a dash of sexiness. To cheer on her bae Ben Simmons, the ‘KUWTK’ star paired a sheer top with some worn blue jeans and white kicks.

After seemingly reigniting her romance with Ben Simmons, 23, at the Super Bowl, Kendall Jenner, 24, fanned the relationship rumors by attending his Feb. 3 game against the Miami Heat. To cheer on Ben and the rest of the Philadelphia 76ers, Kendall threw on a pair of jeans, some comfy sneakers – or, and a sheer, black top. While it was likely not the most unusual fashion choice at the Sixers-Heat game (this happened in Miami, after all), Kendall’s outfit was a bit interesting. From the waist up, she was high-fashion, “late night in a South Beach” club.” From the waist down, she looked more like she was waiting for brunch in Bushwick. But, when you’re Kendall Jenner, you can make anything fashion-forward.

Ben and the Keeping Up with the Kardashians star and model seemingly confirmed that their on-again/off-again romance was back on during Super Bowl LIV. Ben and Kendall were seen walking into the Hard Rock arena in Miami to watch the Kansas City Chiefs defeat the San Francisco 49ers. They were also seen leaving together, and Ben shared an Instagram Story from his booth – in which Kendall’s name card was next to his. While they didn’t show any PDA, they didn’t really hide the fact that they were together at this event.

This Super Bowl rendezvous came weeks after they connected in New York City for a bunch date. However, instead of waiting in line for some avocado toast in the previously mentioned Bushwick, these two were seen keeping it low-key around Tribeca in Manhattan. Days before that, Ben stirred the relationship rumors by giving love to Kendall after she posted a photo from her British Vogue shoot. If that wasn’t enough, the two rang in 2020 together.

Kendall initially sparked talk of reconciliation when she attended a Sixers game in December. So, it seems that they’re giving love another shot. The two split up in May 2019 after a year of casual dating. Their breakup wasn’t caused by anything major, as a source told HollywoodLife EXCLUSIVELY that this relationship fell apart due to their conflicting schedules. Ben, at the time, also wanted to double down on getting better at basketball, especially after the Sixers were eliminated from the 2019 Playoffs by the Toronto Raptors.

The Sixers lost to the Miami Heat, by the way. 137-106. This put Ben and Philly’s record at 31-20 for sixth place in the Eastern Conference.