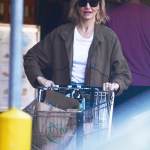 Motherhood appears to be suiting Cameron Diaz just fine, as the new mom was spotted out and about in Los Angeles on Feb. 2!

Cameron Diaz, 47, couldn’t have looked more fresh faced and content when she was seen out and about at a Los Angeles grocery store on Feb. 2. The Holiday star looked cool, calm, and collected while running her errands on the same day as Super Bowl 54! We can’t help but think that Cameron was possibly getting some last minute snacks for the big game featuring the San Francisco 49ers and Kansas City Chiefs. The former actress looked quite casual for her outing. She wore a pair of high waisted jeans, a white T-shirt, olive green jacket and a pair of sunglasses to shade her eyes from the LA sun! Of course, Cameron’s calm repose was so inviting given the excitement of her life in the last month!

One month ago, on Jan. 3, Cameron and her husband of five years, Benji Madden, 40, quietly welcomed their first child into the world! The couple broke the joyous news that they had welcomed their daughter, Raddix Madden, together in an announcement via social media. “We are so happy, blessed and grateful to begin this new decade by announcing the birth of our daughter, Raddix Madden…While we are overjoyed to share this news, we also feel a strong instinct to protect our little one’s privacy,” they shared. “So we won’t be posting pictures or sharing any more details, other than the fact that she is really really cute!! Some would even say RAD,” the pair revealed in the letter, first shared on Cameron’s Instagram account. While the notoriously private couple didn’t share a lot of details about their new bundle of joy, as days past, fans learned new, thrilling information about the latest addition to the Diaz/Madden household!

Over two weeks later, on Jan. 21, Raddix’s birth certificate was made public, revealing her birth date and her unique middle name! The baby girl’s full name is Raddix Chloe Wildflower Madden. Not only was this detail made public, but her actual birthdate was shown as well. The Good Charlotte frontman and actress brought their child into the world on Dec. 30, 2019 at 1:58pm local time, at Cedar’s Sinai Medical Center in Los Angeles. What a whirlwind it has been for the new parents!

All the while, though, Cameron has demonstrated no signs of first-time mom anxiety. Anytime she has been spotted out on a rare occasion, the former actress has always appeared so calm and serene, basking in her new mother glow! We cannot wait to see her out and about more in the future!