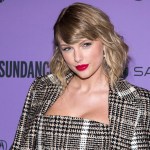 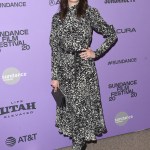 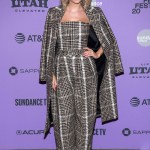 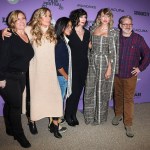 Anne Hathaway was positively beaming in her patterned and belted dress when she joined her cast at the Sundance Film Festival to promote their forthcoming film ‘The Last Thing He Wanted.’

Anne Hathaway, 37, was picture perfect while attending the premiere of her film The Last Thing He Wanted on Jan. 27 at the annual Sundance Film Festival. The Oscar winning actress sported a gorgeous black and ivory dress that was fit for the chilly winter temperatures in Park City, UT. Anne wore the ivory and black pony print crepe de chine puff-shoulder dress and matching Gwen calf hair boots, both from the Transeason 2020 Michael Kors Collection effortlessly. The pattern was quite eye-catching, as the actress added a simple belt to accentuate her waist. It appeared, too, that the dress had matching leggings, which Anne wore beneath her frock. She finished the ensemble by accessorizing with a simple black clutch.

The actress’s recent public appearance comes just after she welcomed the latest addition to her young family! Anne and her husband of nearly eight years, Adam Shulman, 38, welcomed their second child sometime in Dec. 2019. Their newest baby joins older sibling Jonathan Rosebanks Shulman, who the couple welcomed on March 24, 2016. Always comfortable sharing the joys of her life with her fans, Anne made the announcement she and Adam were expecting for a second time in an Instagram post in July 2019. “It’s not for a movie…⁣⁣ #2⁣… All kidding aside, for everyone going through infertility and conception hell, please know it was not a straight line to either of my pregnancies. Sending you extra love 💕,” the actress and advocate shared with her devoted followers.

While the couple have yet to make an official announcement about their bundle of joy — including details like name and date of birth — Anne is clearly poised to get right back to her passion, and fans are incredibly excited for her latest project! Anne stars in director Dee Rees‘ forthcoming The Last Thing He Wanted, the film adaptation of the Joan Didion novel of the same name. Anne’s talented co-stars include Willem Dafoe, Rosie Perez, Ben Affleck and more!

Naturally, Anne has as number of other projects in the works, including 2020’s upcoming adaptation of Roald Dahl‘s The Witches from filmmaker Robert Zemeckis. The movie is slated for an October 2020 release. It’s so exciting to see Anne back on the red carpet promoting her incredible work. The Last Thing He Wanted hits Netflix February 21.