Camila Cabello and Shawn Mendes may have skipped the red carpet at the Grammy Awards on Sunday night, but they made up for it at an after party, where they packed on the PDA. The couple was spotted jamming out to One Direction‘s “Steal My Girl” when she leaned down to give him a quick peck on the lips. Camila and Shawn partied the night away alongside singer, Lewis Capaldi.

Earlier in the night, Camila and Shawn were photographed holding hands as they made their way through the post-Grammys festivities. She stunned in a strapless sparkling mini dress, while Shawn stepped out in a pink silk button-down dress shirt with a black tie draped around his neck. The “Senorita” crooners, whose chemistry is unmatched when performing their hit collaboration, were nominated for Best Pop Duo Performance at 62nd annual Grammys. The award went to “Old Town Road” by Lil Nas X featuring Billy Ray Cyrus.

Ahead of the Grammys, Camila made a startling vow (sorta) if she and Shawn were to take home the Best Pop Duo/Group award. Taking inspiration for what Twenty One Pilots did three years ago, Camila told Radio.com on Jan. 22 that she and Shawn would mimic the pop-punk duo. “If Shawn and I win the Grammy, we will walk on stage in our underwear like Twenty One Pilots did. That’s a promise,” she said. But, before anyone could get their underwear in a bunch, Camila took it back. “Just kidding. It’s not. I gotta work out before I do that.”

Shawn and Camila with @LewisCapaldi #GRAMMYs 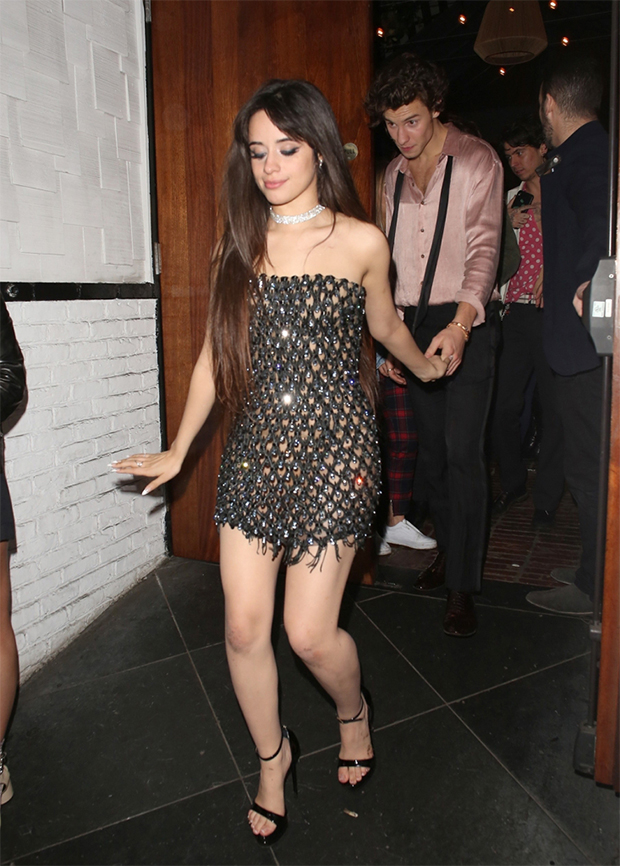 Before daring viewers to tune in and (possibly) see her in her underwear, Camila got serious about how “special” it was that she and Shawn were up for a grammy together. “It feels really special to get to share that kind of experience with someone that is first and foremost my friend that I’ve known for such a long time,” she told Radio.com. “He was actually the first person, I think, that I wrote a song with, which was when we did our collaboration ‘I Know What You Did Last Summer.’ And just kind of like flashing back to then, when we were just two kids in a dressing room… like writing a song really quickly and just being so excited about that to being excited about this song. And we’ve grown up so much, and getting to experience something so prestigious with him is really cool.”

Long teased, Shawn and Camila finally went public with their relationship in the summer of 2019. However, their crushes on each other was brewing long before then. “I met him on the Austin Mahone tour literally like five or six years ago,” she said during the Dec. 6 episode of The Ellen DeGeneres Show. “I for sure had a crush there…I think we both had a crush but we were both being babies about it — but we’re grown now. … I think he did, too, but we were both really young, and he was experiencing the pressures of his career. I don’t think we knew what to do with those feelings.”