Prince Harry is all smiles in new photos at Buckingham Palace on Jan. 16. — The 1st snaps of the Duke of Sussex after he and wife Meghan Markle announced their plan to move to North America. This could be his last royal engagement for a while.

Prince Harry looked calm and happy while meeting with the Rugby Football League at Buckingham Palace on Thursday morning. The Duke of Sussex, who has been a patron of the league since 2016, hosted the Rugby League World Cup 2021 draws for the men’s, women’s and wheelchair tournaments at the palace, which was streamed live across the royal and rugby league Twitter and Facebook channels. The outing marks his first official appearance and royal engagement since he and wife Meghan Markle, 38, announced last week that they plan to take a step back from royal life to become more financially independent.

Harry, 35, looked dapper in a navy blue suit with a grey patterned tie and white undershirt. He was all smiles as he shook hands with Rugby League executives and chatted with young players. The father of one even watched kids from a local school play rugby in the Buckingham Palace gardens.

In a speech, Harry released a message to the crowd, promoting mental health awareness in the sport. “The perception of rugby league is that you need to be tough, you can’t show your feelings, you have to grin and bear it,” he said. — A message that seemed to resonate with his current situation involving his controversial decision to move to North America, away from the royal family. However, Harry made no mention of his personal situation. 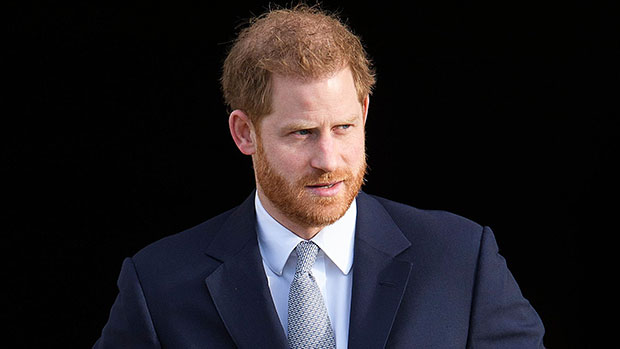 While Harry carried out his Rugby League meeting, Meghan was in Vancouver. Just this week, she visited two separate women’s charities while there.

“She was really on a fact-finding mission,” Kate Gibson, executive director Downtown Eastside Women’s Center, said of Meghan’s visit. “She said that she’d like to have some familiarity with organizations that do the kind of work that she’s familiar with from being in Toronto,” Gibson explained.

Harry and Meghan shocked the world on January 8 when they revealed their plans to step back from their royal duties. The Duke and Duchess of Sussex explained that they will split their time between the U.K. and North America to become more financially stable. The pair, who are parents to 8-month-old son, Archie Harrison Mountbatten-Windsor, made the announcement in a lengthy statement in a post on their official Instagram account.

Soon after, Queen Elizabeth II broke her silence in a statement via Buckingham Palace, which called the situation “complicated,” noting that discussions were at an “early stage” and “will take time to work through.”

However, later on in a separate statement, the Queen said the royal family will support Harry and Meghan.

“My family and I are entirely supportive of Harry and Meghan’s desire to create a new life as a young family,” the statement, via Buckingham Palace, said on January 13. “Although we would have preferred them to remain full-time working Members of the Royal Family, we respect and understand their wish to live a more independent life as a family while remaining a valued part of my family.”

The statement continued: “It has therefore been agreed that there will be a period of transition in which the Sussexes will spend time in Canada and the U.K. These are complex matters for my family to resolve, and there is some more work to be done, but I have asked for final decisions to be reached in the coming days.”

Harry and Meghan have been spending a lot of time recently in Canada, where they previously had many getaways before they married in 2018. The country — which is part of the commonwealth, a group of nations, many of which were under British rule — has treated them very well. Meghan also used to film the TV show, Suits in Toronto, where she lived for quite some time.