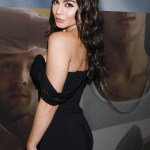 It looks like Vanessa Hudgens is doing just fine after her split from Austin Butler. She looked stunning in a white dress, and appeared totally carefree on the red carpet, just hours after the breakup news broke.

Vanessa Hudgens wasted no time getting back in the spotlight after her breakup from Austin Butler! Just hours after it was reported that the two had ended their nearly nine-year relationship, Vanessa hit the red carpet at the Bad Boys For Life premiere in Los Angeles. She posed for dozens of photos, and looked completely unbothered by the split. Vanessa wore a gorgeous white dress, which featured a beaded bodice and one dramatic, feathered sleeve. There was also a sexy thigh-high slit that allowed her to show some leg, as well as her sky-high black heels! She completed the look with a stunning ring from Gismondi 1754.

The star’s best accessory of the night, though, was her glowing smile. She looked so happy as she twirled around on the carpet and took pictures. If she’s feeling down about her breakup, she was certainly able to hide it! Both Vanessa and Austin have kept quiet about the reports of their split ever since Us Weekly broke the news on the afternoon of Jan. 14. However, fans had already been speculating that something might be up when the two didn’t post any photos together over the entire holiday season at the end of 2019.

Vanessa and Austin started dating in the fall of 2011, less than one year following her breakup from Zac Efron, who she was with for five years. Of course, fans are now hoping that Vanessa and Zac will get back together, but it’s quite a long-shot. After all, they were just teenagers when they were together!

However, in 2019, Vanessa opened up about her relationship with Zac, and had quite positive things to say about how he was a rock for her while they worked on the High School Musical films together. “By being in a relationship, I feel like it kind of kept me stabilized and grounded,” she admitted. “I had someone to lean on who was going through it, as well….I was so young, and having that relationship really stabilized me.” You never know!