Actor Jon Voight, 81, has taken on the role of ‘devoted grandfather’ to his daughter, Angelina Jolie‘s, 44, and her former husband, Brad Pitt‘s, 56, kids to positive outcomes. “Jon dotes on his grandkids, he’s got pictures of them all over his house and office,” a source close to Angelina shared EXCLUSIVELY with HollywoodLife. “Anytime they’re in a magazine he buys it and saves it for them, he’s an extremely proud grandfather.” Since rebuilding his relationship with his daughter, the Oscar winning actor has become “very hands on” with Angelina’s brood.

He even has been known to enjoy some fun, if challenging, activities with his six grandchildren — Maddox, 18, Pax, 16, Zahara, 14, Shiloh, 13, and twins Knox and Vivienne, 11. “Last year they were all doing this elaborate puzzle that was spread out all over the floor in the study and he was right in there helping them with it for hours,” the source recollected. Jon’s attitude has also become incredibly warm around his grandchildren, as well. The actor is often “very encouraging” to Angie’s kids, and tells them “how smart and special they are, building them up.” 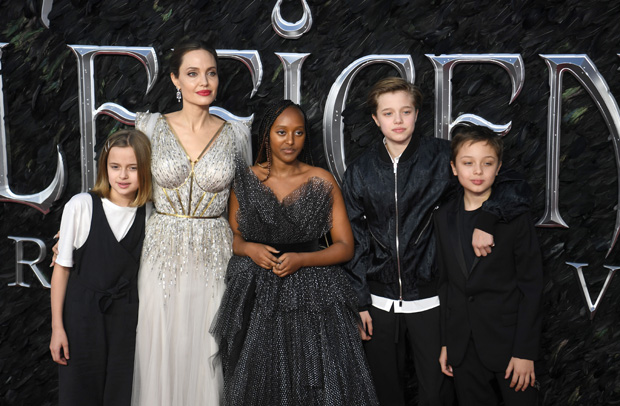 Of course, things haven’t always been simple between Jon and his daughter. The pair shared a very harsh, estranged relationship with one another for a number of years. But it seems that Angie’s personal transition through her divorce has rebuilt what she and her father had lost. “He’s stepped up in some incredible ways over the past few years and really been there for her and the kids,” the source continued. However, the source did note that “doesn’t mean her relationship with her dad is perfect, there’s a lot they don’t see eye to eye on. But she’s at a point where it means more to her to have her dad in her life than it does to convince him to see things her way so she does everything she can to keep the peace and to find common ground.”

In the past, Jon was fervently in favor of Angie trying to rectify her relationship with Brad. But as time went on, and the two seemingly reconciled, and he’s begun to pay more attention to her children and invest considerable time in them. Even Angelina has noted that her father has understood that her kids “needed their grandfather at this time.” As Angelina still navigates her custody battle with Brad, Jon seems to have already shown that he’s “a very devoted grandfather and Angelina loves seeing him with her kids, they adore him.”