Priyanka Chopra and Nick Jonas traded in their Golden Globes after-party invites for a romantic dinner date following the awards show on Sunday night. The couple, who wed on December 1, 2018, hit up West Hollywood hotspot, Craig’s, where they were photographed making their way into the restaurant. Priyanka wore a black sleeveless top with a sheer, embellished black skirt during the post-Globes outing.

The Quantico alum, 37, showed off her amazing figure in the see-through number and carried a turquoise bag. She donned her signature red lip, a brighter shade than her darker red lip she rocked on the Globes red carpet. Priyanka kept her same hairstyle for dinner with her loose waves down and still very much intact.

Before the pair stepped out for dinner, Priyanka turned heads on the red carpet in a pink off-the-shoulder gown and a Bulgari diamond wreath necklace. Meanwhile, Nick, 27, kept on his same silky black suit that he wore on the red carpet. The singer’s Prada tassel tie stood out as the perfect statement piece. And, of course, they were each other’s best accessory at the first awards show of the season. 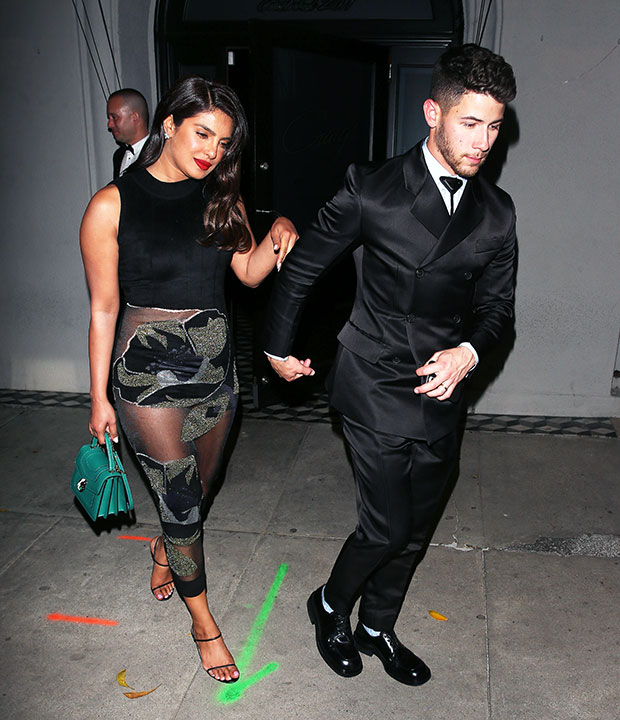 “[Priyanka and Nick] were hand-in-hand as they walked inside,” an eyewitness told HollywoodLife exclusively of Priyanka and Nick’s Golden Globes entrance. “He kissed her on the cheek and cusped the small of her back as he led her to the show,” the source added.

During a red carpet interview, Nick and Priyanka gushed over their new German shepherd puppy, Gino. The couple revealed that they tried to bring their new addition to the 77th annual ceremony, but were sadly told “no.”

“We thought about bringing him tonight, but they said no,” Nick said of Gino during the red carpet telecast on E!. “He’s the best. She [Priyanka] surprised me on our anniversary with a new German shepherd puppy named Gino.”