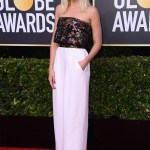 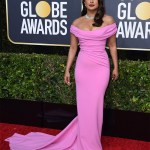 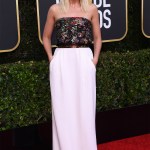 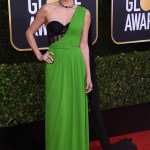 Mixed in with the movie and television stars at the 2020 Golden Globes was one of music’s biggest names, Taylor Swift! The GG nominee looked absolutely incredible when attended the show in a gorgeous gown.

Taylor Swift, 30, definitely made a statement at the Golden Globe Awards! The Cats star turned heads when she arrived to the Jan. 5 show, and she looked fierce while posing for photos on the red carpet. Taylor wore a green and blue Custom Etro Couture gown, which featured a floral design and a keyhole cutout in the center. She had her hair pulled back into an updo to complete the look, with her bangs uncharacteristically pushed away from her face. Taylor’s boyfriend, Joe Alwyn, walked the carpet, as well, but they opted to do so separately.

Taylor is attending the Golden Globes as a nominee — her song, “Beautiful Ghosts,” from the movie Cats, was nominated for Best Original Song! Taylor starred in the movie and wrote the song with Andrew Lloyd Weber. She released a version that she recorded herself, while Francesca Hayward sings the song in the movie. There’s some tough competition in the category, though, as Taylor is up against Elton John and Bernie Taupin (“I’m Gonna Love Me Again” from Rocketman), Kristen Anderson-Lopez and Robert Lopez (“Into the Unknown” from Frozen 2), Beyonce, Timothy McKenzie and Ilya Samanzadeh (“Spirit” from The Lion King) and Joshua Bryan Campbell and Cynthia Erivo (“Stand Up” from Harriet).

Taylor is actually no stranger to the Golden Globes, as she’s already been nominated twice before. In 2013, her song from The Hunger Games, “Safe & Sound,” featuring the Civil Wars, was up for Best Original Song, and in 2014, she scored a nomination in the same category for her track “Sweeter Than Fiction” from One Chance. She has yet to win, though, so perhaps this is her year!

In 2019,  Taylor attended the Golden Globes as a presenter. Her appearance at the show was not announced ahead of time, and she looked stunning in her off-the-shoulder black dress onstage. Afterward, she attended the InStyle after-party in the same look.