Scarlett Johansson slayed again with a killer look on the red carpet as the ‘Black Widow’ actress stunned once again at this year’s Golden Globes.

Scarlett Johannson, 35, looked absolutely stunning at the 2020 Golden Globe Awards on Jan. 5!   Scarlett wore a beautiful, ironically scarlet gown and was radiant as she posed for photos ahead of the show. The Avengers star wore a fiery crimson, strapless, custom Vera Wang gown with a plunging v-neckline that hugged her enviable figure perfectly. She completed the silky look with a chic bun-updo, which allowed the BVLGARI High Jewelry necklace in white diamonds, paired with an archival heritage bracelet and stud earrings she wore to really shine! She walked the red carpet for the star-studded event with her fiancé, SNL comedian Colin Jost, 37, who wore a classic tuxedo that perfectly complimented Scarlett’s gorgeous gown. The couple was beaming as they made their way along the red carpet, clearly excited for the night’s festivities.

It’s a big night for her, as Scarlett’s nominated for Best Performance by an Actress in a Motion Picture Drama for her role in Marriage Story. It’s a tough category, as she’s up against some stiff competition, including Cynthia Ervio for Harriet, Saoirse Ronan for Little Women, Charlize Theron for her role in Bombshell and Renée Zellweger for her role of Hollywood legend Judy Garland in the biopic Judy. However, Scarlett is no stranger to the pressure of having a nomination; this is the 5th time she’s been up for a Golden Globe, so the pressure is on to take home gold! 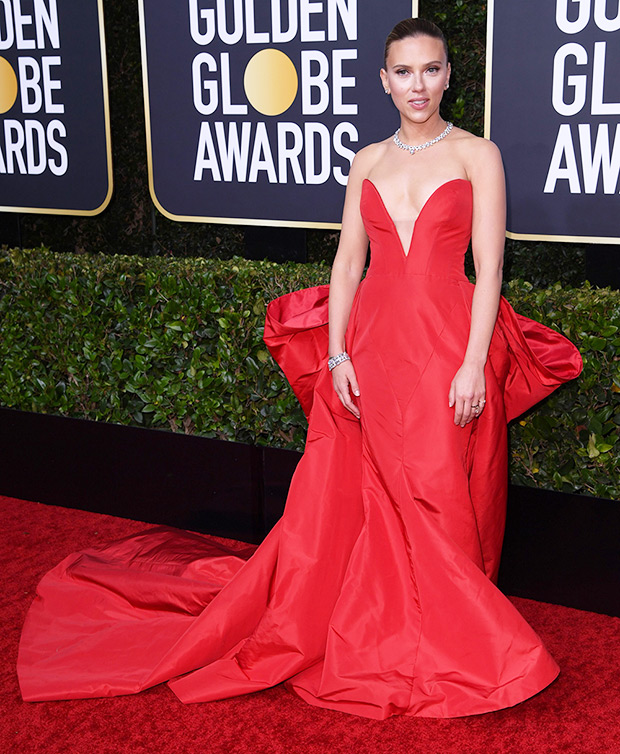 And now the Golden Globe stars have aligned and have given Scarlett another shot at bringing home the coveted award! The Avengers star had an amazing 2019, filled with engagements, movie franchises ending and expanding, and of course, the whole reason she’s attending The Globes, her superb performance in Marriage Story.

The 2020 Golden Globes are being hosted by comedian Ricky Gervais and will feature presenters like Sofia Vergara and Chris Evans. Although all eyes will undoubtedly be on Scarlett and her fellow nominees when the Best Performance by an Actress in a Motion Picture Drama category comes up, win or lose, at least she looked PHENOMENAL!