It’s a fact that Nicole Kidman always serves a killer look on the red carpet, and she proved that again when she showed up to this year’s Golden Globes.

Nicole Kidman, 52, was an absolute vision when she attended the Golden Globes on Jan. 5! The actress wore a beautiful gown and was merely radiant as she posed for photos on the red carpet. For the annual event, Nicole rocked a fiery red strapless dress that wowed on the red carpet. She kept jewelry to a minimum and completed the look with a pair of golden tassel earrings and wore her signature blond locks down. Of course, Nicole’s husband, Keith Urban, was by her side as she arrived and walked the carpet for a very big night, proving yet again that they are definite relationship goals!

At the 2020 Globes, Nicole is nominated for Best Performance by an Actress in a Television Series Drama for her role as Celeste Wright in Big Little Lies. It’s a tough category, and she’s up against Olivia Coleman for The Crown, Jodie Comer for Killing Eve, and both Reese Witherspoon and Jennifer Aniston for their roles in the Apple TV+ series The Morning Show. Nicole is no stranger to the pressure of having a nomination, though — this is the 14th time she’s been up for a Golden Globe! Last year, she was nominated in the Best Actress in a Motion Picture for her role in Destroyer, but lost to Regina King. 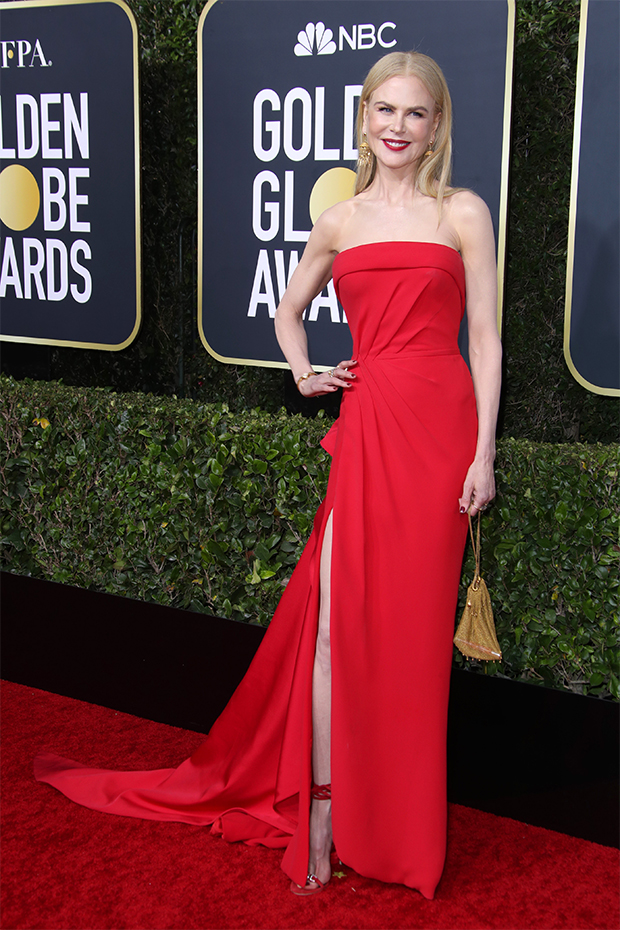 The 2020 Golden Globes are being hosted by comedian Ricky Gervais, and all eyes will undoubtedly be on Nicole and her fellow nominees when the Best Performance by an Actress in a Television Series Drama category comes up. Win or lose, though, at least she looked AMAZING!