Michelle Williams looked radiant in toga style look at the Globes only days after pregnancy and engagement announcement. Check out her gorgeous look here!

Michelle Williams, glowed when she attended the Golden Globes on Jan. 5! The actress wore a beautiful gown and was merely radiant as she posed for photos on the red carpet. For the event, Michelle wore a chiffon peach-orange toga-style gown flowed and draped her body perfectly. She completed the look with a glam set of gorgeous Tiffany & Co. jewels and wore her hair with a slight wave. Michelle attended the Globes with her fiance Thomas Kail, 42, who wore a classic suit and tie that perfectly complemented her ensemble. And of course, the most precious moment on the red carpet was the sneak peek we got of the actress’ baby bump!

At the 2020 Globes, Michelle is nominated for Best Performance by an Actress in a Limited Series or Motion Picture Made for Television for her role as dance legend Gwen Verdon in Fosse/Verdon. It’s going to be a very competitive category this year, and she’s up against some seriously fantastic talent. Michelle’s fellow nominees include Golden Globe new-comer Joey King for her role in The Act, Helen Mirren for her role Catherine the Great, and both Merritt Wever and Kaitlyn Dever for their roles in Unbelievable. Despite the heat packed in this category, Michelle is no stranger to the pressure at the Golden Globes — this is, after all, her sixth time being nominated!

Michelle received her first GG nomination in 2006 when she was nominated for Best Supporting Actress in a Motion Picture Drama for her role in Brokeback Mountain. Five years later, she returned when she was nominated for Best Actress in Motion Picture Drama for Blue Valentine. The next year, Michelle finally won for her portrayal of the iconic Marilyn Monroe in My Week with Marilyn. After the win, Michelle earned two more nominations, one for Best Supporting Actress in Manchester by the Sea in 2017 and another Best Actress nom in 2018’s All the Money in the World. Despite not taking home the awards those years, she received high praise for her portrayals in both films. 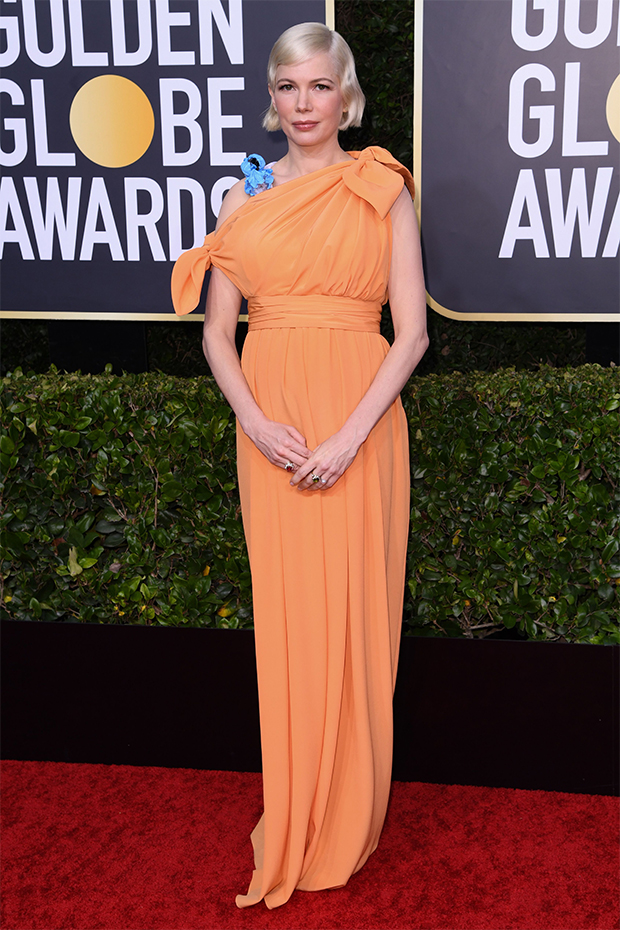 Fans are excited to see if Michelle will finally win a second Globe, and as of right now, her chances look good. On Sept. 22, Michelle won a Primetime Emmy for Outstanding Lead Actress in a Limited Series or Movie for the role in Fosse/Verdon, so maybe luck will be on her side!

The 2020 Golden Globes are being hosted by comedian Ricky Gervais and will feature presenters like Sofia Vergara and Chris Evans. Although all eyes will undoubtedly be on Michelle and her fellow nominees when the Best Performance by an Actress in a Television Series Drama category comes up, win or lose, at least she looked AMAZING!