Jennifer Lopez set the red carpet on fire at the Golden Globes on Sunday night. The singer/actress, 50, dazzled in a strapless dress that featured green, gold and white colors with a massive center bow. She showed off her amazing cheek bones with her hair in an up-do, a large  braided bun.

J.Lo brought along her other half, fiance, Alex Rodriquez, who  couldn’t keep his eyes off her. He looked dapper in a black tux, and later gushed over his wife-to-be. During the red carpet pre-show, the actress revealed why Hustler’s, in which she’s nominated tonight, wrapped up filming in just 29 days.

“We made it in April, we were done [filming] in May, and it was out in September,” Jennifer told Ryan Seacrest, explaining that the creators, directors and production crew “knew they had something special coming.” 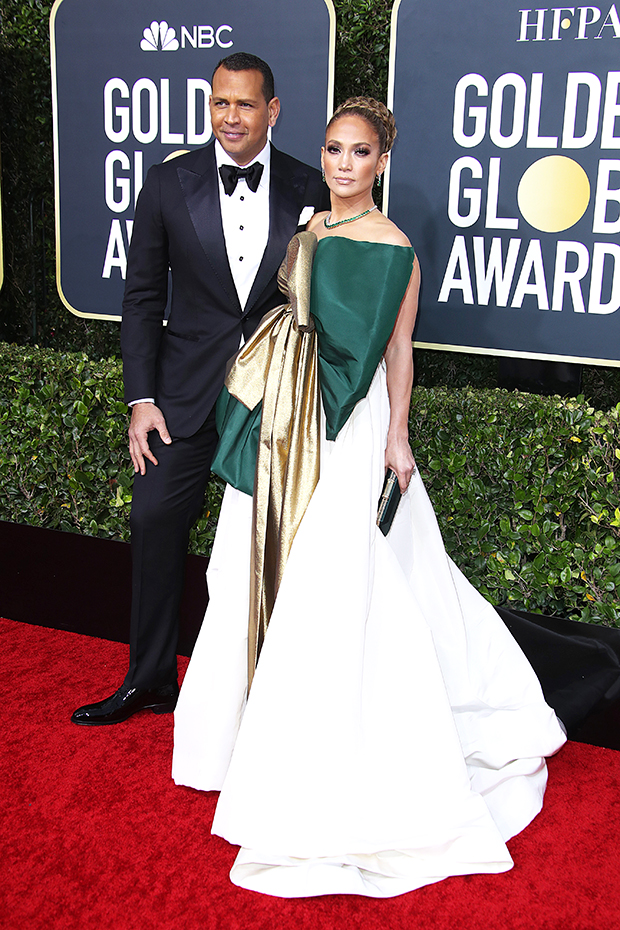 J.Lo went on to note that it was her doing all of the strenuous moves and stunts in her role as the lead of a group of strippers — not a stunt double. “I was like please get a closeup of my face! Lorene, make sure it’s me so they don’t think it’s a stunt double,” J.Lo admitted. Alex added that she ‘practiced really hard” for the role of Ramona and it was “the one benefit of having a pole in our bedroom.”

It’s a big night for J.Lo as she’s nominated for Best Supporting Actress in a Motion Picture for her role in Hustlers. Back in December The Hollywood Foreign Press Association voters announced their picks for the best in television and film, which included J.Lo — marking the nomination as her first in 20 years.

“I’m just waking up and I just heard that I got nominated,” she gushed in a video post on Instagram, celebrating her nomination. “Oh my god, it’s been 20 years since Selena. I’ll see you at the Globes!” J.Lo scored her first nomination for her lead performance as the singer Selena in the 1997 biopic of the Latin performer.

In her video caption, Jennifer added that she “could not be prouder to be recognized by the #HFPA. Ramona was a complicated character and it was an honor and challenge to bring her to life,” the mother of two admitted.

“Hustlers was a labor of love, sweat and perseverance written, directed, produced, edited and starring a group of bad-ass women,” she continued, adding, “I am proud and honored to represent them and this film!!!!”

Hustlers, which also stars Cardi B, Constance Wu, Keke Palmer, Lizzo and Lili Reinhart, was notably shut out of the best director race, which consisted of all male nominees. Lorene Scafaria directed Hustlers, which follows a group of strippers, led by JLo, who plot together to scam wealthy Wall Street men. After becoming fed up of being exploited at their jobs the ringleader and her pack (aka, Constance, Keke and Lili) take advantage of their new riches while creating a corrupt sisterhood, of course, with major drama along the way.

The film has been subject to rave reviews, with JLo having received high praise for her fierce performance as a real-life stripper in the September 2019 hit drama. She was recently named best supporting actress for the film by the Los Angeles Film Critics Association. Just two months after the film’s release in November, Jennifer was also nominated for an Film Independent Spirit Award for Hustlers.