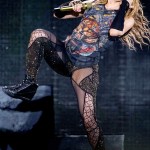 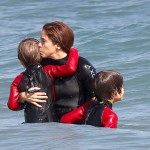 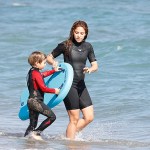 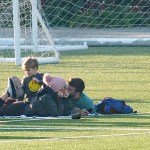 Shakira and her longtime BF Gerard Pique were spotted enjoying their holiday time off with kids Milan, 6, and Sasha, 4! The football pro also showed off his toned physique as he went for a dip in the Miami ocean.

Shakira, 44, and Gerard Pique, 32, are savoring their holiday vacation time! The stunning couple were spotted frolicking on Miami Beach on Dec. 24 along with their adorable kids Milan, 6, and Sasha, 4, on Christmas Eve. The Colombian superstar was in full unwind mode as she was seen ditching her Nike sneakers to walk barefoot in the sand, and showing off her make-up free complexion. Shakira kept the rest of her look casual as she rocked a cropped legging, a white windbreaker jacket, and an Adidas baseball cap, throwing her highlighted locks into a practical ponytail. The singer also got some fitness in, taking a hot pink bike for a spin around the gorgeous oceanfront.

Her Spanish-born boyfriend, who is a professional soccer player for FC Barcelona, was definitely enjoying his time in the sun as he opted to go for a dip in the ocean. Forgetting his swim trunks at home, Gerard stripped right down to his dark gray Dolce & Gabanna boxers showing off his incredibly toned physique. With his six-pack of abs and shapely arms on full display, Gerard looked absolutely incredible as he dove into the water with their two sons! Later, he was seen throwing on his white t-shirt and sweats as he shared an intimate moment with Shakira, who he’s been dating since 2010. Gerard was seen gently stroking her face as they engaged in a conversation, and looked so in love as they chatted.

Their two kids seemingly had a blast as they splashed around and goofed off with each other in the water. We couldn’t get over how much Milan, sporting a sweet bowl cut, looked like his handsome dad. Later, the family — who resides in Miami — all jumped on their bikes for a ride around the beach!

“We try to do the best we can,” Shakira admitted of her family life to HELLO! magazine in 2017. “There’s a lot of love, that’s the foundation of any family. You have to take care of it and dedicate time. Family is the most important thing for me. The rest is secondary.”

The couple appear to be enjoying their time off with just over four weeks to go until Shakira co-headlines the Super Bowl Halftime show with Jennifer Lopez, 50, on Feb. 2 in Miami! “I’m so honored to be taking on one of the world’s biggest stages in the company of a fellow female artist to represent Latinos and Latinas from the U.S. and all over the world — and to top it off, on my birthday!” Shakira said on Nov. 2, referencing her upcoming 43rd birthday. “This is a true American dream and we are going to bring the show of a lifetime!” The two women will undoubtedly be on an intense rehearsal schedule in the new year, and we can’t wait to see the show they put on!