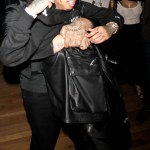 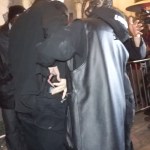 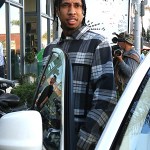 Fans were in for a pleasant surprise when Tyga borrowed Jim Carrey’s suit and iconic expressions from ‘The Mask’ for his new music video, ‘Ayy Macarena.’ The well-received video led fans across Twitter to gush about Tyga’s music on Dec. 20!

Music fans across Twitter have come to a consensus: Tyga, 30, knows how to put out a “hit.” It’s a true talent, because the rapper took a 26-year-old song normally performed at family functions and somehow transformed it into a club banger, titled “Ayy Macarena,” which got its own music video inspired from another ’90s pop culture gem on Dec. 17! Tyga did not slack on his references to both the original song, “Macarena,” and the 1994 movie The Mask, which served as inspiration for the visuals. This video had everything, from Jim Carrey’s yellow suit to a surprise cameo from Los Del Río, the duo who originally sang “Macarena”!

Now that fans had three days to take in the video’s infectious beat and references to the 1994 classic The Mask, they’re realizing that Tyga knows how to maintain his spot in Billboard’s charts. Tyga’s name started trending on Dec. 20, thanks to tweets like “One day we’ll talk about how Tyga keeps a hit” and “Tyga is timeless and that’s that !” Tyga took a risk by remixing such an aged party song, and it worked, because other fans are declaring that the rapper officially had the best “comeback.”

“Tyga deadass had the best comeback of 2019,” a third fan tweeted, while another T-Rawww supporter wrote, “Tyga made one of the best comebacks in this decade.” Following the era of “Rack City” and “Dope” between 2011-2013, Tyga didn’t quite produce a hit people could easily sing along to until 2018 rolled along and with it, Tyga’s chart-topping tracks like “Taste,” “Swish” and “Dip.” Judging by the reaction to “Ayyy Macarena,” Tyga’s keeping the ball rolling.

“Ayy Macarena” is getting so popular, it even played at a party that his ex Kylie Jenner, 22, was at on Dec. 13! The makeup mogul was celebrating the 13th birthday of Diddy‘s twin daughters D’Lila Star and Jessie James, but when her ex-boyfriend’s song came on, she noticeably got a bit awkward! You can watch the EXCLUSIVE footage, here.