Kourtney Kardashian hasn’t said goodbye to Keeping Up With the Kardashians. The Poosh founder, 40, was photographed filming season 18 of the famous family’s hit show on Thursday in Long Beach, CA. Kourtney and her eldest son Mason, who recently turned 10 on December 14, took a casual stroll as show cameras and crew followed close behind.

The mother-son duo were dressed casually for their sunny day of filming. Kourtney rocked an all black ensemble with a long sleeve black shirt that she tucked into a pair of oversized pants. She stepped out in a pair of shiny platform boots with her hair styled in an up do’. Meanwhile, Mason donned a pair of his uncle’s Yeezy’s, which he paired with bright orange pants and a camouflage t-shirt. He carried a jacket in his left hand, which matched his pants.

Kourtney’s day of filming came after her lack of filming caused the family to feud in the most recent episodes of KUWTK. Kim and Khloe Kardashian expressed their frustration with having to pick up Kourtney’s hours of filming because she wanted more privacy, as well as more time with her kids. Kim and Khloe argued that they manage to make time for the show with their busy work and parenting schedules, so why couldn’t Kourtney. 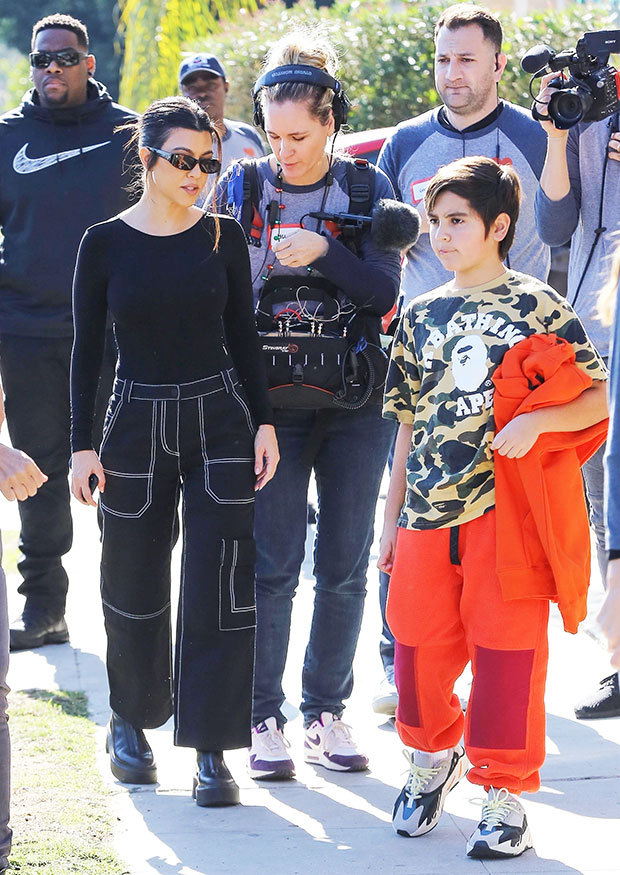 Kourtney expressed her frustration with having no “boundaries” between her personal life and filming the show. During last week’s episode, when Kris Jenner tried to plan a family bonding trip to Wyoming, Kourtney admitted that she’d reached her “breaking point” with the show. She noted that her mental health and happiness were more important than KUWTK, which left the family in limbo, trying to figure out what the future of the show looks like.