Sharon Osbourne is isn’t afraid to open up about her experiences with plastic surgery. The Talk host, 67, recalled the painful post-surgery process after getting her fourth facelift earlier this year, and admitted that she looked like the late Elvis Presley during her recovery! “Oh yeah, it hurts. When people say it doesn’t hurt, believe me, it hurts,” Sharon told the hosts of ITV’s Loose Women on Wednesday morning.

The mother of two went on to explain an encounter she had with her daughter, Kelly Osbourne after she was out of surgery. “Kelly told me that when I came out from the operating theater, that I was going, ‘Help me, help me,’ because it was so bloody painful,” she said before impersonating how her face appeared before it was fully healed.

Sharon said that the facelift left one side of her lip curled up, similar to that of the late Elvis Presley. “I had two weeks of looking like Elvis,” she said. “Ozzy‘s going, ‘Is that what you wanted?’ I was like: ‘I don’t want to look like that, no!'” She later joked that her doctor had pulled everything to “the top of my head and put an elastic band” there to secure it in place. “Everything was just lifted up so it looks more refreshed,” she said. 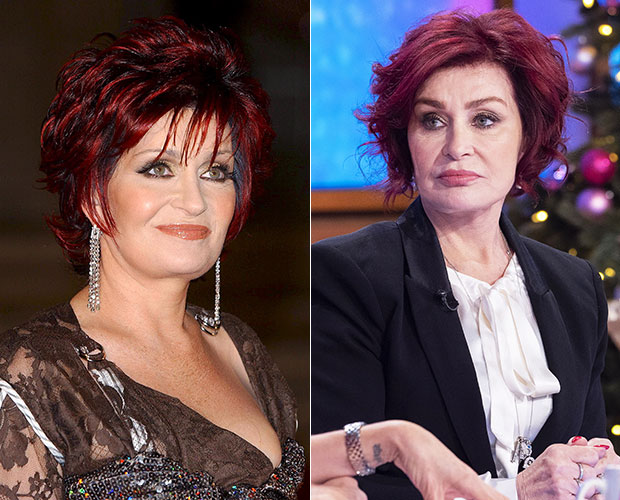 ‘It’s the first time in 40 years that we’re not together.’ @MrsSOsbourne (aka Mrs Christmas) reveals that she won’t be spending Christmas with Ozzy as doctors advised him not to fly. pic.twitter.com/LGkRy5ivUa

Sharon also went on to share her holiday plans and revealed that she will not be spending this Christmas with husband Ozzy, 71, for the first time in their decades-long relationship.

“He’s going to stay home with [son] Jack and Amy and the grandkids and I’m here with Kelly,” she said, noting, “It’s the first time — this will be our 40th Christmas — that we’re not together. It’s going to be different,” Sharon explained, making a sad face. “Kelly and I are going out for our Christmas lunch.”

When asked how Ozzy was doing, Sharon replied, “He fell and damaged his spine. It’s kind of been a domino effect, one thing happens then another thing. The doctors didn’t want him to get on the plane. And Ozzy, I must say, is quite nervous about flying all that way.”