Justin Bieber kicked off the work week with a shirtless photo shoot at Milk Studios in LA on Monday. The singer, 25, showed off his fit physique while leaving the set, which included visitors, wife Hailey Baldwin and his good friend and former flame, Kourtney Kardashian. It’s unclear what the shoot was for, however, Justin was photographed wearing a matching pink button-up and shorts set from his Drew apparel line. So, that could’ve been it.

The “10,000 Hours” singer debuted platinum blonde hair. — A do’ he’s previously donned in the past. Nonetheless, it was a change from his recent pink hair he was spotted with at the end of November. JB bared his tattooed abs as he exited the popular studio space in a pair of black Drew slippers with his signature yellow smiley face design.

Unfortunately, Justin’s new neck tattoo wasn’t quite visible in the new photo, as seen below. The singer’s fans spotted the new ink — an image of a bird soaring on the left side of his neck — and shared photos of it on social media on December 5. He recently debuted another neck tat by celeb favorite, Dr. Woo, who inked the word “Forever” on JB’s skin. 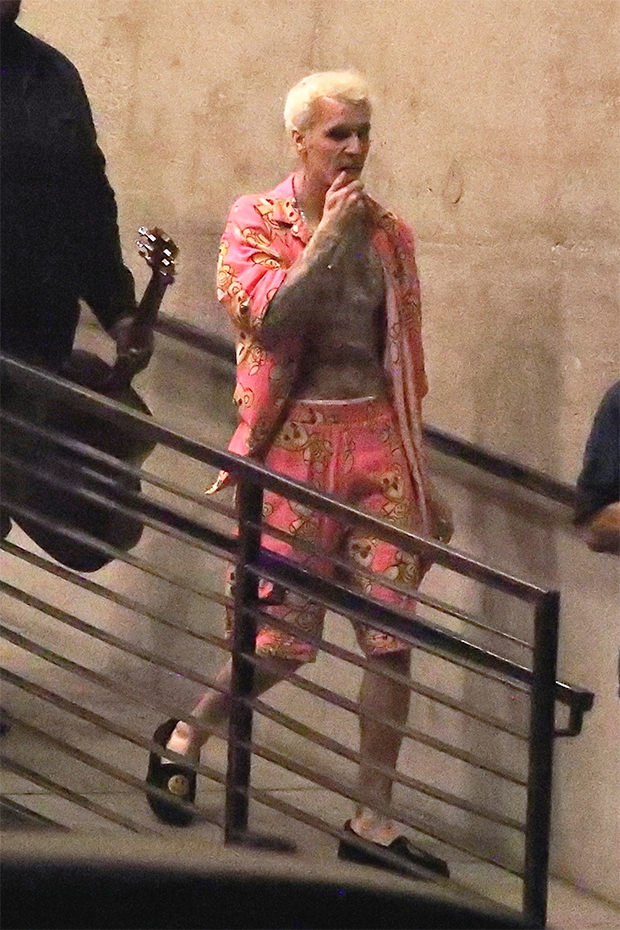 Following the shoot, Justin headed out for a night of good music with wife Hailey and friends. He shared a video from the party scene to his Instagram Stories, where he was dressed in the same outfit he exited his photo shoot in.

Justin’s latest spotting came after he and Hailey attended Art Basel in Miami. And, it was just this past weekend that JB hosted a charity auction for the arts in Los Angeles, which brought out a big crowd that included Jaden Smith and Kylie Jenner. The singer and his good friend, Jaden performed, and to the surprise of many, Kylie took the mic to perform her instant hit, “Rise & Shine”. — The phenomenon phrase she sang to her daughter, Stormi Webster during a video that went viral in October.