Gwen Stefani, 50, looked beyond amazing during the two-hour season 17 finale of The Voice on Dec. 17. The singer, who serves as a coach on the show, put her unique fashion sense on full display with the stunning ensemble. She wore a teal blue mini dress, which featured some feathered fabric and only fell to the very top of her thigh. Adding extra sexiness to the look, Gwen paired the dress with thigh-high, black boots. She wore her hair in an elegant updo, along with dark eye makeup and a light pink lip color. So gorgeous!

The Voice finale is jam-packed with performances from stars like Lady Antebellum, Jennifer Hudson, Dua Lipa and more. Plus, of course, a winner will be named after an incredible season. The four finalists are Rose Short, Ricky Duran, Katie Kadan and Jake Hoot, who will also all be taking the stage to sing one again during the finale. Rose is the finalist from Gwen’s team, and Gwen has been pulling hard for her to get America’s votes.

Despite this being Gwen’s fourth time as a coach on The Voice, she has never won the show. Meanwhile, her fellow coaches — Blake Shelton, Kelly Clarkson and John Legend — have won six times, two times and one time, respectively. Could this be Gwen’s year?! 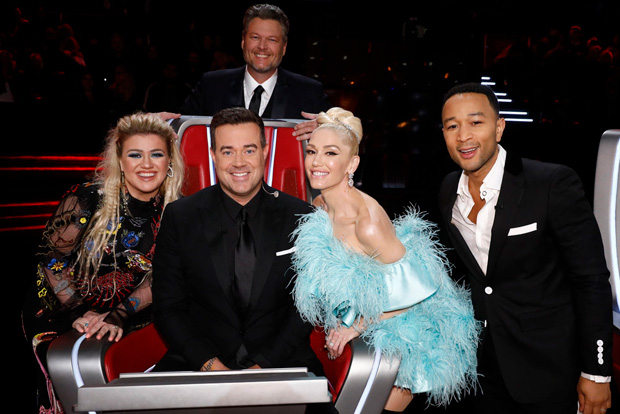 Either way, it’s been an incredible season for the 50-year-old, who got to coach alongside her boyfriend, Blake. The two have not been shy about showing off their hot and heavy romance on the show, and Gwen often documents them hanging out behind-the-scenes before and after the live shows, as well. We can bet Blake probably likes what he sees with this finale outfit!