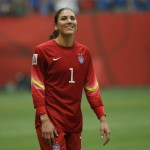 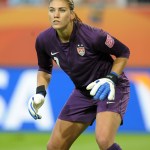 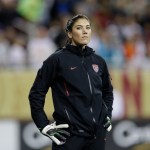 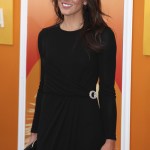 Hope Solo excitingly announced that she is pregnant with a boy and a girl during her Dec. 16 segment on ‘Weekend Winners’ and called it a ‘magisterial’ phase of her life.

Hope Solo, 38, is about to be a mom! The former professional soccer player revealed the happy news when she co-hosted the Dec. 16 episode of the beIN SPORTS Weekend Winners show and she couldn’t help but keep a standing smile on her face during the announcement. “Yes, my husband and I get to practice equality from the very beginning with one boy and one girl,” she said mentioning her NFL player hubby Jerramy Stevens, 40, during the broadcast. “Miniature soccer team on the way,” she continued while rubbing her belly. The clip soon made its way onto Twitter and Hope herself retweeted it along with a baby girl and baby boy emoji.

Hope’s baby news is especially wonderful considering she opened up about suffering from a heartbreaking miscarriage with twins in Feb. 2018. The athlete revealed the devastating news during an interview with Elle for its July issue and explained that she went through the loss while she was running for president of the United States Soccer Federation (USSF). At that point she said she was trying for a long time to get pregnant and wasn’t aware that she was carrying twins until she went to the doctor a week after miscarrying. She explained that one of the eggs was considered an ectopic pregnancy. “The doctor said I was hours from dying,” she said in the interview. “They ended up having to remove my fallopian tube.”

Despite the hard time, Hope admitted she went on to try in vitro fertilization and tried to remain strong. Now it looks like it’s all working out for the hardworking former goalkeeper and we couldn’t be more thrilled for her! She’s been married to Jeremy since 2012 and although they both know the ups and downs of sports, we can bet that there’s nothing more precious than starting a family together so here’s to wishing them a happy and healthy pregnancy!

Hope didn’t give a due date for her twins but we’ll be on the lookout to see if she decides to share any more info soon. We look forward to learning about the soon-to-be bundles of joy!