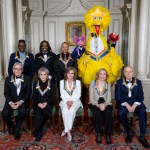 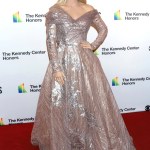 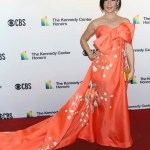 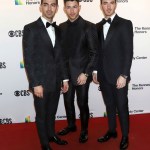 Plenty of big names came out to honor the 2019 class of honorees as the 42nd annual Kennedy Center Honors, which recognizes the best in performing arts. And the event brought out some of the best red carpet fashion of the year!  2019’s honorees included the legendary R&B band Earth, Wind & Fire, Oscar-winning actress Sally Field, iconic singer Linda Ronstadt, the seminal children’s PBS show Sesame Street, and symphony conductor Michael Tilson Thomas and major A-listers turned up to help celebrate. The event took place on Dec. 8 at the Kennedy Center in Washington D.C. and aired a week later on Dec. 15 on CBS.

Carrie Underwood won the night in a shimmering dusty rose one shoulder gown. The country superstar wore one of her best ever red carpet looks, with the dress’ full skirt, a belt to show her tiny waist, and a silver overlay of fabric on the gown to give it a glimmering glow. For her performance honoring Linda Rondstadt, she changed into a glittery ice blue gown with a belted waist as she performed a medley of Linda’s hits including “When Will I Be Loved.”

The Jonas Brothers helped honor Earth Wind and Fire while looking fierce. Kevin and Joe went with classic tuxes while Nick wore an all black ensemble including a black vest, shirt and bowtie in addition to his matching jacket and tailored pants. They entertained the audience with the soul group’s “Boogie Wonderland” among other hits. John Legend joined in on the tribute, looking classic in a double-breasted black tux with an oversized bow tie to sing their classic “Can’t Hide Love.”

Tom Hanks looked sharp in a black tux while rocking a white beard with wife Rita Wilson by his side in a white gown that featured black star and moon patterns on it. He was there to honor longtime friend who he called an “arclight” of the acting world who inspired so many others in his craft. You can check out our gallery of all the fashionable attendees here.