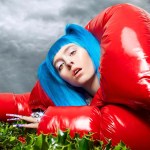 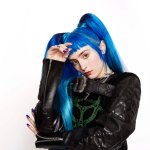 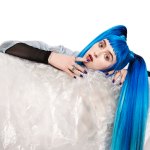 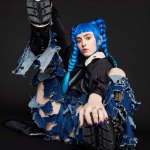 You may have danced to Ashnikko’s ‘STUPID’ bop on TikTok (Miley Cyrus has), but the blue-haired provocateur has much more to offer than sound bites for your funny videos. Meet the singer-rapper you should know ahead of 2020.

Ashnikko knows how to make her listeners feel good. Hollywood’s intimate LACE center, often used for art exhibits, transformed into a mosh pit of blue tongues stained by gumballs and cotton candy as attendees chanted “WET” at the 23-year-old viral sensation’s pop-up show in Los Angeles on Dec. 6. Laughing like a mad scientist and running to and fro across the small stage, the singer-rapper from London bounced her fans’ energy right back as she spat out the lyrics to her viral hit “STUPID.” They’re the same lines that have been used in more than 2.9 million TikTok videos by the beginning of December.

Whether it be a cozy venue or immense social media platform, Ashnikko’s infectious flow brings people right to their feet. That’s an ability that didn’t only take shape when the line “Stupid boy think that I need him” turned into the anti-patriarchy anthem for 15-second videos online. Ashnikko has already been putting out tracks that make her Generation Z fanbase flip the bird to the “stupid boy” in their life, or the metaphorical equivalent of whatever has been trying to dim their shine.

“My goal with my music is to make confidence songs…songs that boost my own confidence,” Ashnikko, which is the mash-up of her real name Ashton Casey, EXCLUSIVELY told HollywoodLife during a sit-down interview at our Los Angeles office one day before her pop-up show. You also can’t help but laugh along with the perverted humor in Ashnikko’s songs, making them even more fun to belt out loud. The singer, who’s inspired by “dumb, gross, explicit” humor found in Adult Swim shows like Tim & Eric and was once suspended from school for writing a dirty poem that involved a Sasquatch and her teacher “sh-tting on the desk or something,” said she tries to be a “funny b-tch.”

With both of those objectives, it may come as a surprise that Ashnikko’s “muse” is actually her ex. “He was so inspirational to me because he really f-cked my life,” Ashnikko said. “I was very angry, a very angry girl for a long time. Still a little bit angry.” But Ashnikko doesn’t mind the steam — she actually feeds on it, telling us, “I feel like we need to be a little bit angry, because f-ck the patriarchy.”

But Ashnikko isn’t just singing controversial lyrics for the sake of sounding controversial, as some do in the hopes of getting a seat on the train of viral Internet content. “I am definitely not a TikTok artist. I’ve been making music for a long time, before TikTok,” Ashnikko told us, who released her first EP Sass Pancakes in 2017, followed by 2018’s EP Unlikeable and her most popular EP to date, Hi, It’s Me, a year after that. Rather, her music has turned into a rallying cry against a world that has elected a president who once encouraged another man to “grab” women “by the p-ssy,” a controversy that Ashnikko called out in the beginning stages of her career in “Please Don’t Grab My P-ssy,” which she uploaded to SoundCloud in 2016.

“I’m a die-hard feminist, it wouldn’t sit right with me if I wasn’t talking about my feminism,” Ashnikko told HollywoodLife, words that she stayed true to at last Friday’s show. She dropped on the floor of the stage to yell, “The rules of consent are so damn EASY,” followed by the declaration, “I’m f-cking tired as f-ck. I’m so mad. My body, your body, is not an invitation for abuse.” That served as the opening monologue before she sang “Invitation,” her 2018 collab with Kodie Shane that’s a PSA about how her body is not something you can “RSVP” to.

While feminism is the raison d’être behind Ashnikko’s music, she is thankful that her newfound viral fame has given that message — and her songs overall — a mega platform. But that also means the singer-rapper is entering a new kind of fame, one that is unique to artists like Lil Nas X who have been instantly exposed to millions of people thanks to a breakthrough hit that made its rounds on TikTok.

“So since ‘STUPID’S” gone viral, the craziest thing that has happened is getting swamped by 12 year olds, which is very strange. It was at my little brother’s middle school dance and that was very surreal,” Ashnikko recalled during our interview.

She’s also hard to miss with her electric blue pigtails, which have many fans comparing Ashnikko to the anime hologram Hatsune Miku (whom she owns a “massive” pillow of on her bed, she happily revealed). There’s her unique sense of style as well, which can be described as a cross between E-girl and streetwear you’d find on the sidewalks of Harajuku. She arrived to the interview looking ready to hop on a stage with a second’s notice, wearing a neon green two-piece set layered with a Western-style denim jacket, and Dr. Martens boots intertwined with colorful shoelace she swiped (with permission) from her stylist’s house.

But Ashnikko doesn’t plan on her look — or sound — on being static. She revealed plans to dye half of her hair orange, and has already followed up the Oct. 22 release of her “STUPID” music video (which has currently clocked in nearly 16 million views) with the release of her alien and cowgirl-themed video for “Working B-tch” on Dec. 3. She’s entertaining the idea of joining a boxing team, and undergoing laser-eye surgery to have 20/20 vision in 2020 (we see where her clever lines come from).

Other than that, nothing is too extreme on Ashnikko’s list of New Years resolutions. Just as her hype-up songs suggest, Ashnikko’s already confident with where she’s at — an indicator that something even bigger than “STUPID” will be hitting us soon.