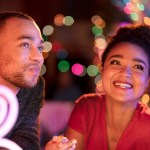 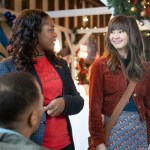 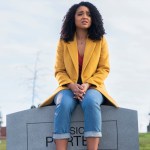 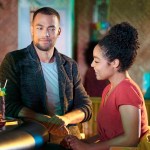 ‘Ghosting: The Spirit of Christmas’ is airing once again during Freeform’s ’25 Days of Christmas’ and HL spoke EXCLUSIVELY with stars Kendrick Sampson and Kimiko Glenn about what they thought about the ending and more.

Ghosting: The Spirit of Christmas first premiered on Dec. 4 but is available to stream on the Freeform app as well as on Hulu. The holiday movie ended with quite the twist. Ben actually died of a pulmonary embolism and reunited with Jess. They got their happily ever after in the afterlife.

HollywoodLife talked EXCLUSIVELY with Kendrick Sampson and Kimiko Glenn about how it all went down. “I liked it. It was an unconventional ending,” Kendrick said. “I like that it challenges the idea of you have to be together right now. They’re going to be together for eternity, apparently. They’ve got plenty of time to develop that, even in the afterlife. I think that was pretty cool. There’s so much more that exists outside of what’s physical and what we experience here on this earth. It’s cool to explore what happens after and that there’s a whole bar life after that and trivia. It also gives the impression that life goes on after life. They’ll be together in eternity. Are they going to end up together? We don’t know. But it seems like they’re open to it and they might even start dating and try to explore that. Is there a dating life in the afterlife? These are cool things to think about.”

Kimiko admitted it was “a little bit shocking” seeing what happens to Ben in the end. “But I think that the humor of it and just the fact that like she comes to visit me at my tea shop at the end is just so sweet. It’s pretty shocking, but I think it was a great button and a great kind of lighthearted button to the end of the movie,” Kimiko continued. She also revealed that she “cried a few times” reading the script.

“I never cry when I read a script,” she told HollywoodLife. “I just kind of read it to see if I like it, but I fully got into it, and then hearing that Aisha [Dee] was going to be a part of it and Kendrick, I was just like, yeah, absolutely. I loved the fact that it was just unusual. I mean, it starts with a death. It’s a little bit dark and there are interesting dynamics and relationships. The friendship aspect, I think, is a pretty accurate reflection of real friendship where it’s not just like warm and fuzzy and cozy. We challenge each other and don’t always get along, but we love each other ultimately. I think that’s kind of a reflection of real life. Then on top of that, there’s also the same-sex relationship, which I think that story needs to be told more just in the mainstream. What a great way to tell that story through a holiday movie.”

Kendrick said that working with Aisha and establishing Jess and Ben’s connection was so much fun. “We jab at each other and we laugh a whole lot,” he said. Kendrick noted that he liked Jess and Ben’s “banter” and how “connected they felt.” He continued: “It wasn’t the traditional conversations and such that you see in rom-coms that tend to be the opposite of feminism.”