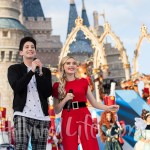 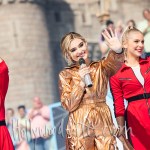 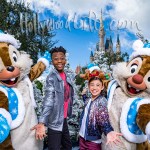 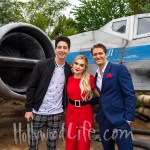 Disney Channel is giving us the most festive party of the year with ‘Disney Channel Holiday Party @ Walt Disney World.’ HL has EXCLUSIVE photos of Milo Manheim, Meg Donnelly, and more stars at the event!

Meg will sing “Home for the Holidays.” Issac and Ruby will perform “12 Days of Christmas.” Kylie will be singing “Santa Claus is Coming to Town“ aboard the Disney Fantasy. Grammy-winning group Pentatonix performs an a cappella rendition of “Here Comes Santa Claus,” while Grammy winner Shaggy will sing “Jamaican Drummer Boy.” These festive performances are going to get us into the holiday spirit immediately.

During the special, viewers will enjoy exclusive Disney Parks sneak peeks, including a first look at Mickey and Minnie’s Runaway Railway coming to Disney’s Hollywood Studios in Florida in spring 2020 and Disneyland Park in California in the future. An exclusive first look of the Disney Channel Original Movie sequel ZOMBIES 2 will also be shown. The sequel is set to premiere on Disney Channel in 2020. BUNK’D stars Scarlett Estevez and Israel Johnson will host a special family segment highlighting the U.S. Marine Corps Reserve’s Toys for Tots program.