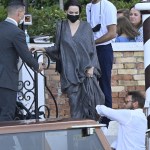 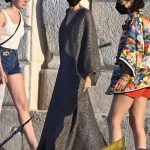 Since Angelina Jolie doesn’t have a social media presence, we have to say a big thank you to Salma Hayek for sharing a selfie with the stunning ‘Eternals’ stars together on Instagram.

Angelina Jolie, 44, is practically a unicorn when it comes to Instagram photos. In fact her only one to date came in May of 2018 when her Maleficent: Mistress of Evil co-star Elle Fanning got Angie to be goofy behind her during their first day of shooting, where she had on just a white bathrobe and Maleficent’s black horns for a pic. But thanks to her Eternals co-star Salma Hayek  — who is very active on the ‘gram — we finally have a second Angie Instagram sighting and it features the two beauties in a selfie.

Salma, 53, shared a photo with Angelina over her left shoulder and actor Kumail Nanjiani, 41, over her right on Dec. 11 with the caption, “Gosh am I so lucky… I thought I was just going to be working with great actors playing aliens; little did I know, I was going to befriend amazing human beings.”

Salma as usual looks completely ageless in the pic, wearing no makeup yet still so very beautiful. She has her hair in casual shoulder-length waves while wearing a black sweater. Angelina is classy and a little more formal in what appears to be a black tank dress and a strand of pearls around her neck. She also has a layer of natural toned makeup on. It looks like the cast got together for a dinner, because there are more similar pics on Kumail’s page featuring more Eternals co-stars in the setting.

Kumail reposted Salma’s photo with effusive praise for his incredibly talented co-stars. “I get to work with these amazings every day. It’s an honor and a thrill. They are going to be so good in Eternals. Every day on set with them is a masterclass. I just take notes,” he gushed. The movie has been filming in Europe and is set for release in 2020. It’s Angelina’s much anticipated debut in the Marvel Cinematic Universe where she will playing the lead, Thena. Salma will be portraying Ajak while Kumail has the role of Kingo.

The highly anticipated super hero flick is set millions of years in the past, and follows an alien race called The Celestials, who experiment on humans. In the midst of the latter, they create a race of immortal super humans known as The Eternals, along with a second villainous race, The Deviants. Battles then ensue.