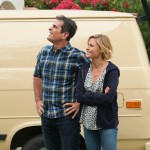 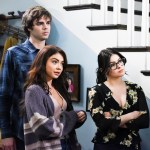 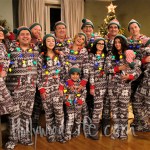 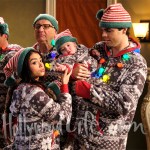 It’s the last Christmas for ‘Modern Family.’ HollywoodLife is EXCLUSIVELY debuting photos from the Dec. 11 episode featuring the Dunphys and Pritchetts in adorable holiday onesies.

Modern Family’s final Christmas episode is airing Dec. 11 and HollywoodLife is giving you three EXCLUSIVE photos to enjoy ahead of the episode. The Modern Family fam is coming together and dressing up in festive onesies for the occasion. That means everyone from Jay to the twins. The entire cast unites for one adorable holiday photo. In another photo, Haley and Dylan cuddle up to one of the twins.

Is anyone feeling emotional about the final Modern Family Christmas? This episode is definitely going to bring on all the feels. The synopsis for the Dec. 11 episode reads: “Cameron is hoping to keep everyone happy for their annual Christmas dinner as he hides and prepares for his big interview for a head coaching position out of state. Meanwhile, Haley is excited to finally be reunited with wine; and Mitchell is suspicious of Cam’s holiday trip to visit his family in Missouri.”

The final season of Modern Family has been an emotional roller coaster for the cast. Rico Rodriguez, who plays Manny, opened up to HollywoodLife about saying goodbye to the show that’s been a part of his life for over a decade. “They’re my second family, so I know that once we’ve finished in March, I am going to think we’re going to come back and start up in July,” he told HollywoodLife. “It’s going to be weird when that time of the year comes around again and we know we’re not going to get together to start filming again. It’s definitely going to be weird and an adjustment period.”

The episode is appropriately titled “The Last Christmas.” Modern Family airs Wednesdays at 9 p.m. on ABC and will return for new episodes in 2020.