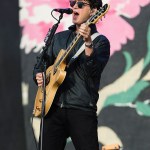 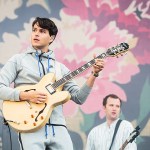 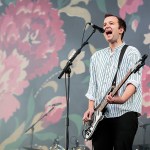 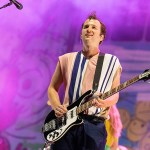 With Kanye West likely skipping the Grammys, who’s going to rush the stage if Vampire Weekend wins Album of the Year? Frontman Ezra Koenig has a suggestion in an EXCLUSIVE video for HollywoodLife.

If and when Vampire Weekend’s Father Of The Bride wins Album Of The Year at the 62nd Annual Grammy Awards, frontman Ezra Koenig will have to think fast.  He’ll have to remember to thank everyone, come up with an apology for Lana Del Rey, and make sure not to drop the award. The one thing he won’t have to worry about is Kanye West stealing the moment. Ever since Ye pulled his stunt in 2015, the threat of a random Yeezy crashing the stage has loomed overhead the Grammys. Yet, with Ye likely skipping the show, is there someone Ezra would prefer “Kanye” him?

“If someone to rush the stage to high-five me, that would be cool,” Ezra told ALT 92.3’s Kevan Kenney backstage at RADIO.COM’s Not So Silent Night in Brooklyn. After turning the scenario into a more positive celebration instead of someone trying to “shame me for winning,” Ezra decided that he’d be happy to get some love from a friend. “The only person I really actually remotely know – like, who I’ve had a conversation with — who’s in that category is Justin [Vernon] of Bon Iver. If he ran and gave me a high-five, that would be a comforting moment.”

If Kanye were to somehow come out of nowhere and rush the stage at the Grammys, it wouldn’t be his first time meeting Ezra. The Vampire Weekend singer spent time with Ye in Mexico while he worked on The Life Of Pablo. During that time, Ezra and Dirty Projectors’ Dave Longstreth co-wrote a Kanye song that never came out. And you thought Jesus Is King was delayed.

There’s some stiff competition for what is arguably the top prize at the 2020 Grammys. Bon Iver’s I,I is also up for Album of The Year. So is the deluxe edition of Lizzo’s Cuz I Love You, Lil Nas X’s debut ep 7, H.E.R.’s I Used To Know Her, Billie Eilish’s When We All Fall Asleep, Where Do We Go?, Lana Del Rey’s Norman F*cking Rockwell!, and Ariana Grande’s thank u, next. Speaking of which, Ezra revealed that if Vampire Weekend wins the award, his first thought is going to be, “Lana Del Rey fans are gonna be mad.”

There’s too much anger in the world, and Vampire Weekend is all about the joy. Ezra told Rolling Stone that after the band’s previous release, Modern Vampires of the City, he hit a wall. “I found touring totally joyless,” he said. “I think with a lot of artists, your career is a really be-careful-what-you-wish-for scenario. You want to do music full-time.” After graduating from college, Ezra panicked that he would “never be able to do music full-time… And then, a mere five, six years later, I wasn’t sure I wanted to do music full-time either, because I’d been burned out on the road. Finding that balance is tricky, and maybe some people find it to be a corny word, but joy is an important thing.”

Proving that the music world is smaller than we think, Ezra’s work with Beyonce earned him a Grammy nomination in 2016. He’s credited as a writer and producer on her song, “Hold Up,” from her landmark album, Lemonade. Oh, and the reason why Kanye rushed the Grammys’ stage in 2015? He was angry after Beck’s Morning Phase album won over – surprise! – Beyonce’s 2013 self-titled release.