Queen Elizabeth hosted leaders from around the world at Buckingham Palace for a reception in honor of the 70th anniversary of NATO, and Donald Trump and Melania Trump were in attendance. The Queen greeted her guests in a receiving line, and was joined by her son, Prince Charles, and his wife, Duchess Camila, as the Trumps entered. All three of them greeted the President and First Lady, but noticeably missing from the line was the Queen’s daughter, Princess Anne. Anne was standing to the side, and did not come forward to greet the Trumps.

In a video of Donald and Melania’s entrance, Queen Elizabeth could be seen gesturing at Anne to join her, but Anne simply turned away and refused! The Queen looked visibly frustrated, but of course, there was nothing she could do in the moment. Oh, to be a fly on the wall for the conversation afterward, though! The video of Princess Anne ignoring Donald Trump quickly went viral on social media, and Twitter users flooded their feeds with comments of praise for the royal.

“Princess Anne not giving a single f*** about Tump should make everyone smile,” one person wrote. Another added, “Who can blame Princess Anne for laughing at and wanting to avoid Donald Trump,” while someone else gushed, “Princess Anne owning season three of The Crown and now owning Trump’s palace visit is definitely not something I saw coming in 2019.”

Queen: “Anne, get over here right this instant.” 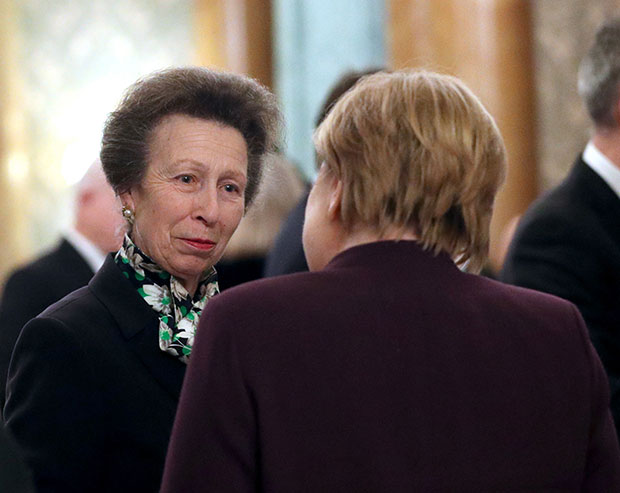 However, some people also pointed out the double standard regarding the compliments Princess Anne has been receiving, as they claimed that Meghan Markle would be criticized if she had reacted the same way. “Y’all remember how Meghan was bashed for being ‘too political’ and called NASTY for comments she made about Trump before she was even a royal?” someone asked. “I’m pretty sure that laughing at somebody and refusing to greet them is a political movement.” Another person pointed out, “I do recall Meghan being called all sorts of names, by the same people praising Anne, for not attending Trump’s state visit, although Meghan [was] on maternity leave at said time. The double standards here. Lmfao.” Watch the full video of Anne ignoring Trump above.