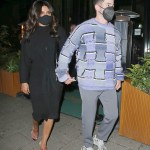 Nick Jonas was seen taking his brand new dog Gino out for a walk in the Big Apple on Nov. 30, just one day before his anniversary with wife Priyanka Chopra.

Nick Jonas, 27, spent a little time with his new German Shepherd dog Gino on Nov. 30 and it was the cutest thing you’ll see all day! The singer was spotted walking with the pup on the sidewalks of New York City and was all bundled up for the brisk weather in a navy blue coat, matching pants, and sunglasses. He looked casually cool in the getup and Gino, who was on a leash, looked happy and alert.

The sighting comes just five days after Nick’s wife Priyanka Chopra, 37, surprised him with the pooch on Nov. 26. She strolled into her and her hubby’s bedroom with Gino and introduced them right as he was waking up. The memorable moment was captured in a video Nick posted to Instagram and it had fans saying, “aww” more times than we can count! “Pri came home with the absolute best surprise this morning. Please meet our new pup @ginothegerman I haven’t stopped smiling since I woke up this morning and finally realized what was going on. Thank you @priyankachopra ❤️ 🐕,” Nick’s caption for the video read.

The surprise seemed to be an early anniversary present for the “Sucker” crooner. The lovebirds celebrate one year of being married on Dec. 1 and Priyanka’s sweet response to Nick’s video mentioned the milestone. “Happy almost anniversary babu 😍 ur face..hilarious 😂,” it read.

Perhaps Nick and Priyanka’s new addition will help them share the extra love they have as they wait to start a family of their own. Although they’ve both expressed wanting children in the future, it seems they’re waiting for the right time to go ahead and do so. We’ll be on the lookout to see when that is but in the meantime, we’ll enjoy all the smiles Gino brings!