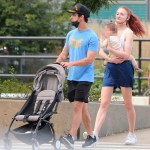 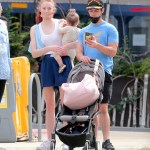 During a post-Thanksgiving outing, Joe Jonas and Sophie Turner braved the cold in NYC by wearing big winter coats and holding hands while strolling on the sidewalk.

Joe Jonas, 30, and Sophie Turner, 23, are gearing up for their first holiday season as a married couple! The duo was photographed strolling around Brooklyn on Nov. 29, one day after Thanksgiving. They both wore puffy winter jackets to battle the 40 degree temperatures, and they kept close to one another by holding hands as they walked down the sidewalk. Both stars also rocked sunglasses and sneakers during the outing, while Sophie carried a small purse and water bottle in her right hand.

Joe and Sophie’s day out came ahead of the Jonas Brothers Nov. 29 show in Atlantic City, New Jersey. The band is in the midst of their Happiness Begins tour, which kicked off back in August and has taken Joe and his brothers, Kevin Jonas and Nick Jonas, across North America and Latin America so far. The current leg of the tour will wrap on Dec. 15 in California, then pick up again in Europe at the end of January before concluding on Feb. 22 in Paris, France.

It’s been QUITE a year for Joe and Sophie, who tied the knot in Las Vegas on May, 1, then celebrated with an official wedding in France at the end of June. Plus, Sophie starred in the blockbuster, X-Men: Dark Phoenix, as well as the buzzed-about final season of Game of Thrones, while the Jonas Brothers reunited AND dropped their first album in TEN years together….all in a matter of months!

Despite how hectic it’s been, Joe and Sophie have been dedicated to spending time together and making their marriage work. Luckily, Joe’s brothers also have wives — Kevin is married to Danielle Jonas and Nick wed Priyanka Chopra in 2018 — so they’re all in it together!