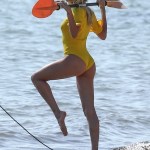 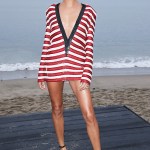 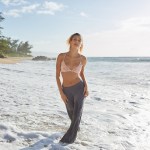 Hailey Baldwin appeared to be posing for a sporty-themed photoshoot as she rocked a red lip and a retro swimsuit!

Hailey Baldwin, 23, isn’t on holiday just yet! The super model was spotted rocking a stylish and sexy yellow one-piece swimsuit as she frolicked on Miami Beach on Wednesday, Nov. 27. Hailey’s unique look featured a high neckline and a short sleeve hem that flared out. While it sounds conservative, the high cut hem proved otherwise, allowing Hailey to show off her toned derriere and perfectly shaped legs proving her pilates are working wonders! She finished her look with a futuristic pair of red shades and a matching red lipstick while her “miss you” tattoo could be seen on her left ankle.

Hailey was seen standing in front of the water holding a kayak paddle and stretching while a boat sat to her left. While it initially looked like Hailey was hitting the beach for an early morning kayak adventure, it turns out she was actually doing a photoshoot! Crew members and equipment from the shoot could be seen standing around her in various photos — explaining her absolutely flawless makeup and perfectly blown out hair.

In a second look from the shoot, the Baldwin sported a red-orange scoop neck sweater and matching knit short. The equally-sexy outfit was completely open in the back, featuring a flirty string-tie detail as a closure.

Though Hailey was working, her adorable dog Oscar Bieber could be spotted on set and taking in the Miami scenery! Justin Bieber, 25, and Hailey adopted the sweet Maltese Yorkie just before Christmas last year. “Meet our dogson his name is Oscar,” Justin posted about the family addition in Dec. 2018. In other behind-the-scenes snaps, Oscar was totally upstaging his glam mama as her hairdresser Panos Papandrianos petting his “hairy nephew.”

Prior to the shoot, Hailey hinted she may not have been feeling 100%. “Feelin sicky on my way to work and yes, these are all for me,” she captioned a tray of four drinks from popular juice and coffee bar Joe & The Juice, including the orange-colored “go away doc” containing carrot, ginger and apple.

While Justin wasn’t on set for the shoot, the couple were spotted on a romantic dinner date on Nov. 25 and the pop star was rocking a new pink hair do. Hailey could also be seen soaking up the sun in a shiny blue bikini the day before, and certainly seems to be enjoying her time down in Miami!