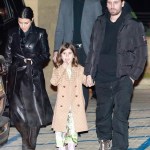 Penelope Disick is a few dollars richer after losing her big front tooth, mom, Kourtney Kardashian shared in a sweet video on Instagram! She woke up to a special, glittery surprise from the tooth fairy on Nov. 24 and Kourt documented the whole thing!

Penelope Disick woke up to a two-dollar bill covered in glitter from the tooth fairy on Sunday morning! Kourtney Kardashian took to Instagram to share a cute video of her daughter, 7, discovering the surprise under her pillow. “Look who visited us last night for the big front tooth? A two-dollar bill she left with so much glitter,” Kourtney said to P in the clip.

The Poosh founder, 40, then asked Penelope to follow the glitter trail that led her to a tiny purple door that read her name. “My favorite flower, P,” Kourtney said as she filmed a single white gardenia flower that sat in front of the “tooth fairy’s door.”

Kourtney also showed off a screen grab she took of a closeup of Penelope’s face showing off her missing front tooth. “I am melting into pieces,” Kourtney captured the snap, which showed her FaceTiming her daughter. Kourtney’s other two kids, sons Mason, 9, and Reign, 4, who she shares with her ex, Scott Disick, 36, were not present in the social media posts.

P’s visit from the tooth fairy came after Kourtney recently admitted on Keeping Up With The Kardashians that she no longer has a nanny because of an incident involving the 7-year-old.

“You guys I don’t even have a nanny anymore,” Kourtney said while at a family dinner. “She said P was really upset. She was putting her in the car and Penelope scratched her face, but P can be out of control,” the mother of three explained. “I think she blacks out and does these wild things.”