Selena Gomez set the bar high for tonight’s fashion at the American Music Awards. The singer, 27, showed up to the red carpet in a bright neon green mini dress by Versace (Spring 2020) with a small front train and gold buttons. Selena, who coordinated her outfit and footwear with a pair of neon pumps, showed off her toned arms and legs in the strapless number.

The actress showed off her new bob haircut, which compliments her so well. Her voluminous brunette locks were straight and bouncy and were curled under and toward her face. Sel’s shimmery eyes popped with autumn colors of brown, orange maroon. She accessorized with two silver diamond chains.

It’s a big night for Selena, who opened the AMAs in her first live television performance in two years. She sang her two new October-released songs, “Lose You to Love Me,” a slower relationship-inspired track, followed by her up tempo hit, “Look At Her Now.” The whole crowd sang along with her as she performed the emotional track first, dressed in a skintight black gown. While she has not revealed the meanings behind the two songs, fans have speculated that they were seemingly inspired by her on-and-off relationship with ex-boyfriend, Justin Bieber. Sel’s “Lose You To Love Me” recently topped the Billboard Hot 100 — her first track to ever do so. 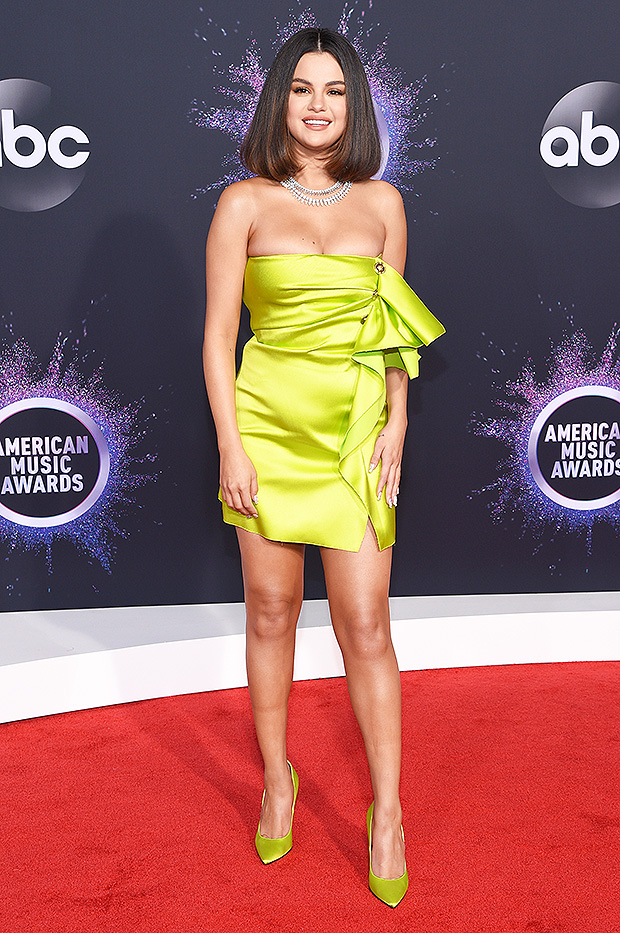 Selena Gomez on the red carpet at the 2019 American Music Awards on Sunday, November 24 in LA. (Photo credit: Stewart Cook/Shutterstock)

Selena then changed into a sultry white bodysuit with silver jewels to transition into her second song of the opener, “Look At Her Now”. She previously performed at the AMAs in 2014, 2015 and 2017, when she put on a memorable performance (as a blonde) of her hit, “Wolves.”

.@SelenaGomez slays performance of “Lose You To Love Me” and “Look At Her Now” at the #AMAs. https://t.co/CNFIpQYeJL

Just days before the big show, Selena announced the official release date of her second solo album. The 13-track record will debut January 10, 2020, but it’s currently available for preorder under the name SG2. It’s unclear if SG2 is a temporary or permanent title of the singer’s new album, which is the followup to 2015’s Revival.

Related: Wizkid: 5 Things About The International Superstar Performing For The First Time At The AMAs

Tonight is also special for Selena because her best friend, Taylor Swift will receive the Artist of the Decade award. Sel previously took to social media with a sweet message to her BFF, congratulating her on the accolade.