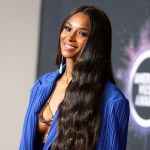 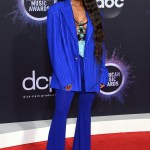 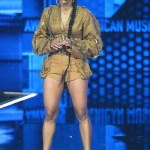 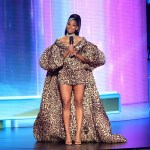 As the host of the 2019 AMAs, one outfit wouldn’t suffice. From a Balmain pantsuit to a leopard dress, Ciara dazzled on the award show red carpet and stage in multiple glamorous ensembles!

“1, 2” and more — we kept counting to keep up with Ciara’s outfit changes at the American Music Awards on Nov. 24! The singer wowed ABC viewers with a parade of chic ensembles while making her AMAs hosting debut at the Microsoft Theater in Los Angeles on Sunday night. Before she even took the stage, Ci Ci impressed fans right off the bat when she stepped onto the red carpet in a one-of-a-kind Balmain pantsuit. Going braless, Ciara paired a pleated blue blazer with bell-bottom pants in a matching color, complementing the look with turquoise jewelry from Jacquie Aiche.

Moving inside the venue, Ciara got the party with an energetic performance of her new track “Melanin,” a legend-packed collab featuring Lupita Nyong’o, Ester Dean, City Girls and La La Anthony! Ciara shined extra bright on the stage thanks to a custom two-piece set from Bryan Hearns, which featured a sparkly gold crop top, tan short shorts and Nike high-top sneakers in a matching color.

Ciara wasn’t done serving looks. After her performance, she later returned to the stage to introduce a different performance, but made just as big a style statement in a leopard dress with a billowing cape. After ascending the stage in even more stylish fits — a sparkly silver co-ord designed by Alessandra Rich, an orange jumpsuit embellished with sequins — Ciara closed out the show in a black corset dress that featured mesh rib panels and capris, a piece from Thierry Mugler. Sleek, stunning and elegant — just like Ciara. You can see even more of her AMAs outfits in HollywoodLife’s gallery above!

Although this was Ciara’s first time hosting the AMAs, it wasn’t her first time taking its stage! She showed off her trademark moves while teaming up with Missy Elliott to perform “Level Up” and “Dose” at the 2018 show. Ciara is also a two-time “Favorite Soul/R&B Female Artist” nominee, which she was honored with at the 2013 and 2005 AMAs. Years later, this is still an exciting time for Ci Ci — in addition to her big hosting gig, she recently celebrated the 15-year anniversary of her debut studio album, Goodies, which dropped in Sept. 2004! Time flies by when you’re having fun like Ciara is.