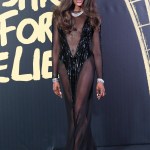 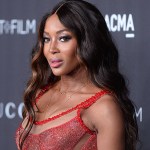 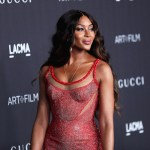 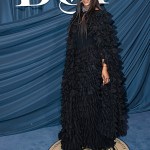 Naomi Campbell did a makeup tutorial and complimented BTS’s line of men’s makeup. Now the BTS army is going wild that the supermodel gave the band a shout-out.

Naomi Campbell is officially being stanned by the BTS Army after she gave a shout out to the boys’ makeup line. During a Nov. 22 makeup tutorial with beauty YouTuber Jackie Aina, the iconic supermodel casually named dropped the band and she ended up as a top trending Twitter topic for giving BTS props. “My assistant made this,” showing Jackie a makeup product. “It’s for men. Cause you know the men are coming up with makeup now. I mean BTS have a whole makeup line. Yeah, they do,” Naomi, 49, explains while dabbing her face with a tissue.

Jackie tells her, “The BTS Army is going to ignite in the comments now that you’ve acknowledged them” and Naomi responds, “I think it’s fantastic. I’ve seen it. So I think men’s makeup is going to be huge. It’s on its way.” The Army didn’t come in the comments section, but the snippet of the tutorial video where she mentioned BTS caught on like a wildfire on Twitter.

Icy Joonie tweeted, “PAUSE NAOMI CAMPBELL???? LIKE THE NAOMI CAMPBELL??? TALKING ABOUT BTS??#*#>[×<>÷ HOLD ON I NEED A MOMENT PLS,” while user Honey wrote, “Naomi Campbell mentioned BTS casually and complimented their make up line!!!” along with three crying emojis.

Use Jose tweeted, “not only were our boys a jeopardy answer but now supermodel naomi campbell mentions bts and their makeup. she did it so casually too like cmon the impact,”  and user Raf wrote, “but THE naomi campbell, a fashion icon, a legend in the fashion world acknowledging bts? thats what you call IMPACT.” Ms. Beatrice tweeted “It’s the way she mentions so casually, with the assumption that others will obviously already know who they are, that makes this so great. For anyone who doesn’t know, Naomi Campbell was one of the top supermodels of the late 80s and the 90s and is an icon.”

User taetae tweeted, “such an iconic woman like the naomi campbell talking about bts and knowing things about them is so sexy.. bts r not only big, recognized and talented in the music industry but also in the make-up and fashion industry.. call it impact.” Naomi may not have realized it at the time, but the shout-out just earned her the love of the BTS Army.