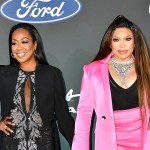 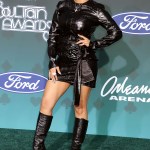 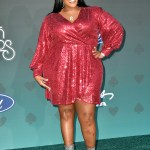 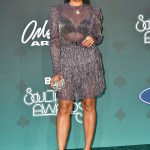 The red carpet at the 2019 Soul Train Awards in Las Vegas was jam-packed with some of our favorite R&B stars as hosts Tisha Campbell & Tichina Arnold payed tribute to Janet Jackson in their opening!

Some of our favorite R&B stars arrived at the 2019 BET Soul Train Awards at the Orleans Arena in Las Vegas on Sunday, November 17 and the red carpet arrivals were super glamorous. Hosts and real-life BFFs Tisha Campbell and Tichina Arnold returned for the second year in a row and arrived on the red carpet looking fabulous in their first of many outfits for the night! Tisha was feminine and chic in a Barbie pink suit with a wide leg pant and matching pink lipstick. The actress sported a low cut black top underneath, and accessorized with a silver statement necklace to tie the ensemble together. Tichina brought all the Vegas vibes in a midi-length black sequin dress with silver floral details! The fitted number featured a sexy mesh cutout in the middle and she finished her look with a classic black overcoat and a peep-toe style sandal.

The duo absolutely slayed with the opening number for the show, performing alongside Pose‘s Mj Rodriguez paying tribute to the one and only Janet Jackson! The duo looked like they were having a blast as they belted out some of Janet’s most iconic songs, including timeless banger “Miss You Much” (including the dance moves, serious props) and her career-defining 1989 track “Rhythm Nation.” The real-life friends — who met back on the set of 1986’s Little House of Horrors — were HILARIOUS as they traded jabs at each other throughout the show!

Performers at this year’s award show including Wale and Jeremih, who looked dapper on the carpet in their striped looks! Jeremih’s luxe velvet suit with gold pinstripes photographed beautifully against the emerald green carpet, and he finished the look with a black leather sneaker featuring the iconic Louis Vuitton monogram. Kelly Price — also performing with Wale — Jojo, Angela Yee, Bobby V, Luke James, and Keyshia Cole all looked glamorous on the carpet ahead of their highly anticipated performances!

Kelly was an absolute vision in a red sequin mini dress that accented her curves in all the right places, and we were absolutely obsessed with Jojo’s insanely sexy blazer dress! The “Leave (Get Out)” singer’s look featured an asymmetrical cut with a black pinstripe print on one side, and a cream one on the either. Keyshia Cole was rocking a black leather mini featuring a croc print — one of Fall’s must-have trends — that featured a feminine tie around the waist. Her toned legs and body looked incredible in the sexy number, which would definitely be Kim Kardashian-approved.

Anthony Hamilton, Carl Thomas, Erykah Badu, Le’Andria Johnson, Robert Glasper, Babyface, and Kirk Franklin were also in attendance and everyone was dressed to the nines in their red carpet ensembles. Legendary producer duo and longtime Janet Jackson collaborators Jimmy Jam and Terry Lewis stepped out on the carpet before receiving “The Legends Award” snapping photos on the red carpet alongside The Time‘s Morris Day and Jerome Benton. Jimmy and Terry kept things classic in black suits, while Morris channeling the 80s in a red carpet ready silver suit!

Yolanda Adams also stole the show on the carpet in her fun and flirty sequin dress that featured a denim band around the waist. The festive dress screamed Vegas with its multicolored sequins, and her electric blue suede booties finished the look with a playful kick. It’s a huge night for Yolanda as she is set to receive the fifth annual “Lady Of Soul Award” — congrats! There were so many amazing red carpet arrivals at the 2019 Soul Train Awards and you can see all of the stars in attendance when you click through the gallery above!