The most unlikely of stars are popping up at BravoCon, including ‘RHOBH’ alum, Kim Richards! HollywoodLife, along with many surprised fans, spotted the former Bravo regular looking stunning at the network’s 3-day event in NYC on Nov. 15!

Kim Richards is back! While the former Real Housewives of Beverly Hills star, 55, hasn’t returned to the show as a regular cast member (that we know of), she still has her hand in the Bravo world. Fans, including HollywoodLife were pleasantly surprised to see the RHOBH alum  when she made an unannounced appearance at the “Bravo All Stars: OG Housewives Edition” panel at the first annual BravoCon in New York City, Friday morning.

Kim, who struggled with sobriety during her time on the hit show (2010-2015), looked happy and healthy on stage at the event. She joined other former Housewives, who were previously announced as panelists — Jeana Keough (RHOC), Jill Zarin (RHONY), Kim Zolciak-Biermann (RHOA), “ Adrienne Maloof (RHOBH) and Caroline Manzo (RHONJ). She wore her curly blonde hair down and rocked a black long sleeve top.

Kim told the crowd at BravoCon that she’s enjoying being a full-time grandma. She also expressed that she misses the reality show that took viewers inside some of her highest of highs and lowest of lows. As for her sobriety journey? Kim told the crowd, “I’m glad I could share that. I love all of you!”, according to Page Six. 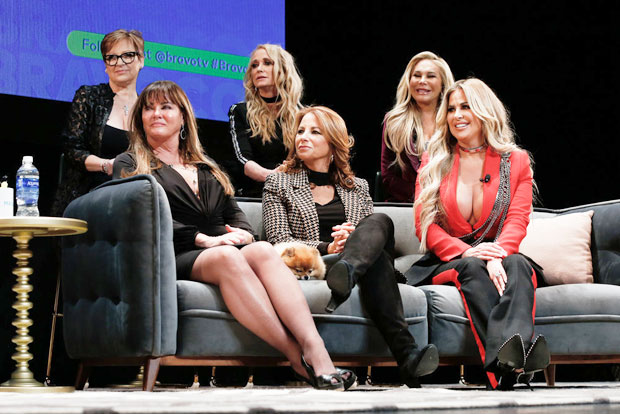 Kim’s surprise appearance at BravoCon — which takes place from November 15-17 — comes just five days after she stirred up questions about a possible return to RHOBH. On November 11, she was spotted filming for the show’s upcoming 10th season, which will mark the first without Lisa Vanderpump, who quit the show in June following the infamous “Puppygate” scandal.

Eagle-eyed fans noticed Kim, along with RHOBH OG’s, Brandi Glanville, Eileen Davidson and Faye Resnick at an entertainment event where the Bravo cameras were filming for the show’s upcoming season. The live stream videos spread around the internet like wildfire earlier this week, sparking many questions about if the show will bring back its former stars in a larger capacity — especially with LVP out of the picture.