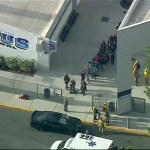 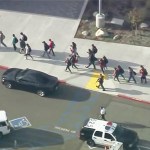 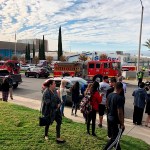 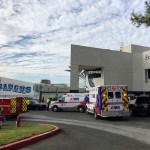 Authorities confirmed that a suspect is in custody hours after a shooting at Saugus High School in Santa Clarita, California broke out.

UPDATE: 11/14/19, 2:52 PM ET — Police confirmed that two students, a 16-year-old girl and a 14-year-old male, are dead during a media conference where new details emerged from the horrific tragedy. A 911 call first took place at 7:38 local time before multiple other calls were made about the shooting. Video showed the suspect, 16, using a .45 caliber semi-automatic pistol during the incident where he shot five others and them himself. The others four were transported to local hospitals. The suspect is listed in grave condition and his girlfriend and mother are with police. There were also two recent threats investigated at Saugus High School but neither were connected to this incident. No word on the motive for why this happened.

UPDATE: 11/14/19, 12:41 PM ET — LA County sheriff Alex Villanueva tweeted that the suspect, who is a student at Saugus High School is in custody and being treated at a local hospital after he shot himself. One female patient has been confirmed dead via Henry Mayo Hospital’s Twitter account.

UPDATE: 11/14/19, 11:54 AM ET — The Associated Press confirmed via authorities that at least six people have been injured during the shooting, 3 of whom are in critical condition at Henry Mayo Hospital. The suspect is described as a 16-year-old Asian male who was dressed in black and entered the school before 8:00 AM local time and opened fire in the quad area of the school as students were about to begin first-period classes. Once the shooting began, students in classrooms immediately began blocking doors with tables and chairs, locking themselves in for over an hour and waiting in silence.

Saugus High School is located 30-40 miles north of Los Angeles in Santa Clarita, California. The local sheriff’s station had advised people, via Twitter, to stay out of the area while they were on the hunt for the shooter.

Neighboring elementary schools were also locked down, according to the Santa Clarita Sheriff’s Station, but merely as a precaution. “We have multiple victims down,” said Sgt. Bob Boese of the LA County Sheriff’s Department told NBC.

Students led by officers single file out of Saugus High School as a shooting was reported at the campus in Santa Clarita, CA.

HollywoodLife has reached out to local law enforcement for further details. However, the police department is sharing real-time information on their Twitter feed.