Miranda Lambert has been slaying the red carpet at country music award shows for years, and once again, she totally killed it with her look at the Country Music Association Awards on Nov. 13. With her husband, Brendan McLoughlin, by her side, Miranda ruled the red carpet in one of her most gorgeous looks ever. The 36-year-old wore a plunging pink dress, which featured a thigh-high leg slit and beaded design throughout. She completed the look with her hair parted down the middle and styled in loose waves, while also rocking light pink lipstick to match the gown.

The CMA Awards are big night for Miranda. After the red carpet, she hit the stage to sing a sassy rendition of her hit, “It All Comes Out In The Wash,” during the show. For the performance she changed into a glittering, Randi Rahm couture mini dress, and she rocked out on the guitar while she belted out the track. Plus, she’s also nominated for Female Vocalist of the Year against Carrie Underwood, Maren Morris, Kacey Musgraves, and Kelsea Ballerini. Miranda has won that specific award SEVEN times at past CMA Awards, but the competition is fiercer than ever this time around! Plus, since this year’s show is honoring women in country music, the gal who wins Female Vocalist of the Year will have a brighter spotlight on her than ever before.

November has been quite an amazing month for Miranda already, as she released her seventh studio album, Wildcard, on Nov. 1. After telling many stories of heartbreak on her last album, The Weight of These Wings, Miranda was back to her grittier, full-on country side with this record, and her fans have been loving it! She also just celebrated her 36th birthday on Nov. 10, so CMA Awards week has been quite a whirlwind. 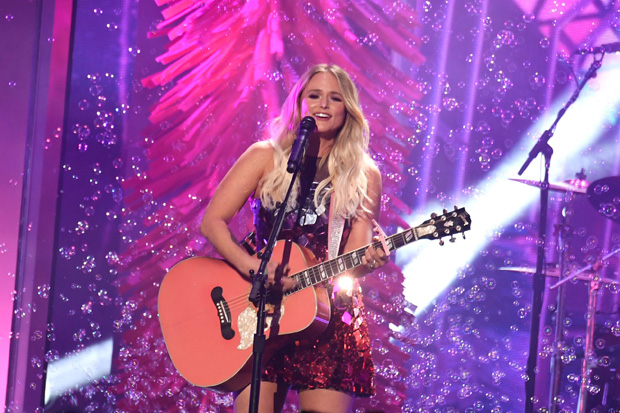 Miranda is currently in the midst of her Roadside Bars & Pink Guitars tour, which kicked off at the end of summer. In 2020, she’ll begin her Wildcard tour, which starts on Jan. 16 in Tupelo, Mississippi and concludes on May 9 in Montreal.