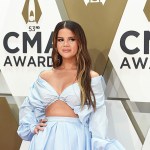 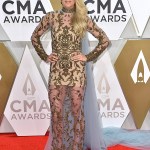 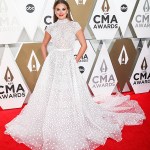 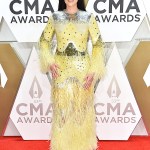 Play their f-ing records! Country singer Jennifer Nettles is taking aim at the country music radio heads who have notoriously ignored the women in the genre for years.

Jennifer Nettles is here to make a statement! The Sugarland singer wowed on the CMA Awards red carpet in a Christian Siriano-designed white pantsuit with a long hot pink train that adorned a hand-painted portrait of a woman with the Venus symbol by artist Alice Mizrachi. However, when Jennifer opened up the long skirt on the carpet, the message was a lot clearer. “Play our f*cking records” one side of the skirt said, while the other added the pleasantries, “Please and thank you.” The back of the jacket also called for “Equal Play,” something the women in the country industry have been battling against for years — to receive airtime on the male-dominated country radio. In addition to her outspoken look, the “I Can Do Hard Things” singer also rocked gorgeous David Yurman jewels.

“This performance — with it being a celebration of women and country from decades past to present — it really sets the tone for the rest of the night,” Maren Morris of The Highwomen said of the all-female power opening in an interview with Billboard. Her bandmate Brandi Carlile added, “As a kid that was raised in the late ‘80s and early ‘90s listening to the stories that some of these women were telling to me about my life and my potential, it means a lot, especially since they touched on some of these specific songs. I just think it’s an incredible way to remind country music of all the powerful things that women have had to say over the years.”

Unfortunately, women have received the short end of the stick when it comes to getting their records played on the radio — something that has always been an issue for the female sex, but now, they’re starting to take a stand. In 2018, Sara Evans, who is performing in the opening, called out terrestrial radio for its lack of support of her music and other female artists. “I grew up on country music and I made my whole, entire career on country radio and contributed what I believe is a lot of great music to the country genre,” she told Billboard at that time “So for my family to watch me sobbing at home because [radio] refused to play the single I released when I’ve worked my ass off and gone to visit every country programmer in America and I feel like I deserve a spot … it’s devastated all of us.”

Ahead of her performance tonight, Sara told the outlet, “Women are still being shunned from country radio. [I hope] all the program directors will kind of see this and get the message and they’ll just change regardless of ratings. It has to change. Once they do that, it will become the norm again.”

Be sure to watch the CMA Awards tonight on ABC at 8 PM!