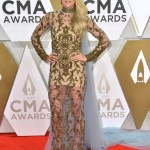 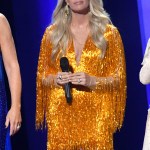 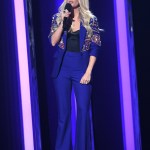 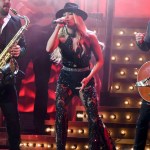 From two sheer gowns to multiple mini dresses, Carrie Underwood didn’t slack in the wardrobe department for the 2019 CMAs. It’s her 12th year hosting the show, and this country queen is far from getting too comfortable!

This gig isn’t new to Carrie Underwood, but she’s still dressing like it’s her first day on the job! The 36-year-old American Idol winner still made sure to impress at the 2019 Country Music Association Awards, which served as her 12th consecutive year of taking the stage as the hostess with the mostess (this year, though, she was joined by Dolly Parton and Reba McEntire in place of Brad Paisley). Given the CMAs’ focus on women and their legacy in music this year, Carrie made sure to roll out one outfit after another that had girl power written all over each ensemble.

To kick off the long night ahead of her, Carrie marked her arrival on the red carpet in a dress that had no shortage of sparkles. The “Southbound” singer dazzled in a sheer Elie Mad gown embellished with a jacquard print made of gold sequins, which was layered over a nude mini dress. A train of grey tulle added an extra touch of elegance to the regal dress, which she complemented with Jimmy Choo heels and equally luxurious jewelry: Jared Lehr earrings, in addition to Loree Rodkin and Maxior rings.

Once Carrie made her way across the red carpet, she sparkled once again in a fringed gold dress, which she wore for the show’s opening performance led by an army of country music queens. She stayed in the same tinsel-like dress to croon to “Those Memories of You” with Dolly and Reba (FYI, Dolly originally released that song in 1987 with Emmylou Harris and Linda Ronstadt).

With the red carpet portion, two performances and an opening monologue behind her, Carrie’s time on the stage was far from over. This country darling switched gears to reinvented menswear to introduce Reba’s performance and later, take the stage for yet another performance! For her fourth outfit change, Carrie redefined the tuxedo in a glittery halter neck top attached to sheer floral pants, which she topped off with a flared (and sparkly) blazer and fedora! It was seductive yet mysterious, perfect for her jazzy performance of “Drinking Alone.” You can see all of Carrie’s outfits at the 2019 CMAs in HollywoodLife’s gallery above!

With another CMA Awards show come and gone, it’s now time to archive Carrie’s fabulous fits along with the rest of her past award show dresses. You can see these in HollywoodLife’s roundup CMAs’ sexiest dresses of all time! Who could forget when she cut an elegant figure in a royal blue mermaid gown that had ruffles dancing across her bustline in 2017, a piece that was designed by Fouad Sarkis Couture? Rewinding it back even further, Carrie looked just as classy in a bright orange Gauri & Nainika gown with a peplum bodice. There’s a reason Carrie receives the spotlight at the CMA Awards year after year!