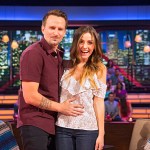 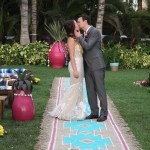 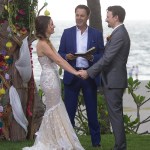 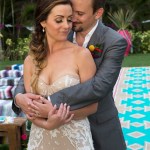 And baby makes four! Carly Waddell and Evan Bass welcomed a baby boy on Nov. 12, less than two years after the birth of their daughter, Bella.

Carly Waddell, 33, and Evan Bass are officially a family of four! They welcomed their second child together — a baby boy — on November 12, they confirmed to Us Weekly one day later. The pair also confirmed that they named their son Charles Wolfe. “Baby Charlie is healthy and delivery was fast and perfect, straight into mommy’s arms,” Evan revealed. “Everyone is doing well.” Charles was born at 6 lbs, 13oz. and 18 inches long.

Carly and Evan are already parents to one-year-old daughter, Isabella “Bella” Evelyn, who they welcomed on February 15, 2018. Evan has three sons — Liam, Nathan and Ensley — from a previous relationship, as well. The couple announced that they were expecting baby No. 2 with the help of Isabella on May 9. “Beer Belly, Bella Belly, BABY BELLY,” Carly captioned a photo of the family of three (at the time), who showed off their bellies together. “We so SO EXCITED to FINALLY announce Bella’s little brother or sister will be here in November!!! (If you wonder why I haven’t been on social media as much…well, this is why!)”, she continued. Carly held a collage of ultrasound photos in the post.

Ahead of welcoming their second child together, Carly and Evan enjoyed a summer babymoon. The couple traveled to Paris and London at the end of July, where they shared sweet photos together on Instagram. They previously took a trip to Hawaii before Carly gave birth to Isabella. But, it was evident that they wanted a bit more adventure this time around.

Carly and and Evan met on the third season of Bachelor in Paradise, and things didn’t go so smooth at first. BIP fans will know that Carly wasn’t a fan of Evan in the beginning, but he kept trying, over and over, to win her heart  — and you know what happened next!

The couple tied the knot in front of an intimate group of family and friends in Vidanta Nuevo Vallarta resort near Puerto Vallarta, Mexico in June 2017. Guests included some of Bachelor nation’s most familiar faces, Jade Roper and Tanner Tolbert. And, Bachelor nation host, Chris Harrison officiated the ceremony. Carly and Evan’s wedding was televised during season 4 of BIP. Congratulations to the couple on their newest addition!