Robyn Crawford finally got the opportunity to confront Wendy Williams about a feisty interview the unfiltered host had with Whitney Houston nearly two decades ago. During the 2003 radio interview, Wendy, 55, questioned Whitney about rumors including, drug use and financial issues, that had been reported about the singer at the time. — Something Robyn, 58, said both she and especially Whitney were not happy about.

“I’ve never met Whitney, I had never met her,” Wendy, who admitted she was a burgeoning radio star in college radio at the time, said about the icon. “You act like, you talk like you did,” Robyn hit back. Wendy went on to recall seeing Whitney in concert Beacon Theater in Boston, her first time seeing the singer in person. “I’ve only talked to her once, and that was on the radio. And that was that interview,” Wendy continued to defend herself.

Robyn went on to explain what happened when she heard Whitney was going to speak with Wendy in 2003. “I heard that interview, I got a call from my former assistant. I wasn’t working with Whitney. And she said Whitney’s going to be on Wendy Williams. I said, ‘What do you mean she’s going to be on Wendy?’” Robyn said. “That was the cumulative, fed up Whitney Houston that I heard.” 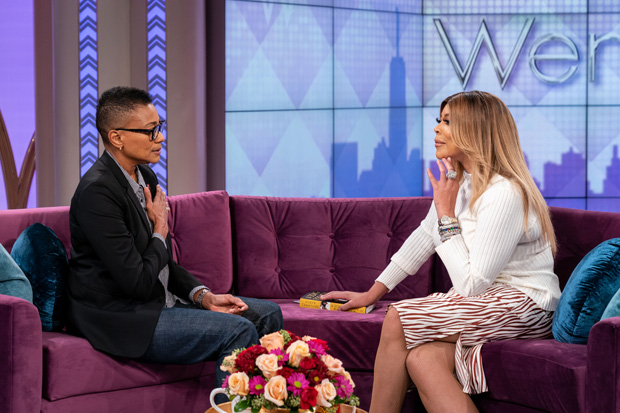 Wendy then asked if Whitney was “fed up with me or fed up with the world?”

Related: ‘I Wanna Dance With Somebody’ Movie: The New Trailer & More About The Whitney Houston Biopic

Robyn revealed that the host “had been talking about Whitney and myself for so long,” referring to rumors that she and Whitney had been in a romantic relationship at the time.

The former actress explained her exchange with Whitney after her 2003 interview with Wendy, and admitted that they had plans to confront Wendy about her comments back then.

“Everyone lived by the radio back then. We’re in the car, you’re talking like you lived with us, like you’re roommates with us. We’re in the car, sitting still and Whitney would say, ‘Who the… who is she? Who is this woman? I don’t even know what she looks like,’” Robyn recalled.

“We were gonna… We didn’t know what you looked like and our plan was to go down to Hudson Street … and wait for you right outside,” Robyn told Wendy, who was shocked because she admittedly “can’t fight.”

“We weren’t gonna fight, we just wanted to see you face-to-face and have a chat,” Robyn said.

Robyn was a guest on The Wendy Williams Show to promote her new memoir, A Song For You: My Life With Whitney Houston, where she reveals for the first time, that she and Whitney had a physically romantic relationship. Robyn also discusses the pair’s friendship as teens that quickly turned serious in the ’80s.