UPDATE (11/12/19 AT 9:00 A.M. ET): Just hours after slamming his dad for getting engaged, Lamar Odom Jr., took to Instagram to issue an apology. “Last night I was emotional seeing my father got engaged through social media,” the 17-year-old wrote. “I was hurt and caught off-guard. At the end of the day, I am a teenager that is becoming a young man. I have to be responsible for what I post, I have nothing but love for my dad and want what’s best for him.”

ORIGINAL STORY: Lamar Odom shocked fans on Nov. 11 by announcing on Instagram that he and his girlfriend of four months Sabrina Parr are engaged. Even more stunned was his 17-year-old son Lamar Morales Odom by ex Liza Morales, as he found out along with everyone else! Next to the smiling photo announcement that the former NBA pro posted to his Instagram showing Sabrina standing over him with her big diamond ring on display, Lamar wrote, “Introducing my new fiancé!! Soon to be Mrs. Parr-Odom. She the ONE!!!! @getuptoparr.” Lamar Jr. then let him have it in the comments for not even telling his family before sharing the news with the world.

“Not a text or a phone call to see how people who’ve know this dude his whole life to see how we would feel or react. Knew shawty for 4 months and already got you twisted. Family n friends already don’t approve of homegirl but already she got your ass inna sunken place. Shame family gotta find out on social media but that’s been how life been all the time as the son of an Odom,” Lamar Jr. wrote in a now deleted comment (which we screen-grabbed). Ouch! Finding out your dad is engaged along with the rest of his Instagram followers had to have really stung.

It sadly doesn’t seem that father and son are very close. The last time the 40-year-old appeared on his son’s Instagram page was in a photo from Christmas of 2017 where they were twinning in gaudy sweaters. But Lamar Jr. isn’t a heavy OG user, only posting nine photos since then.

Lamar and personal trainer/life coach Sabrina started dating in August of 2019 and things got serious fast. He was proclaiming his love for her via IG within days of them going public and he even moved across the country to Atlanta to be with Sabrina. While Lamar Jr. was unhappy about the engagement news, almost all of the rest of his fans were thrilled for him. 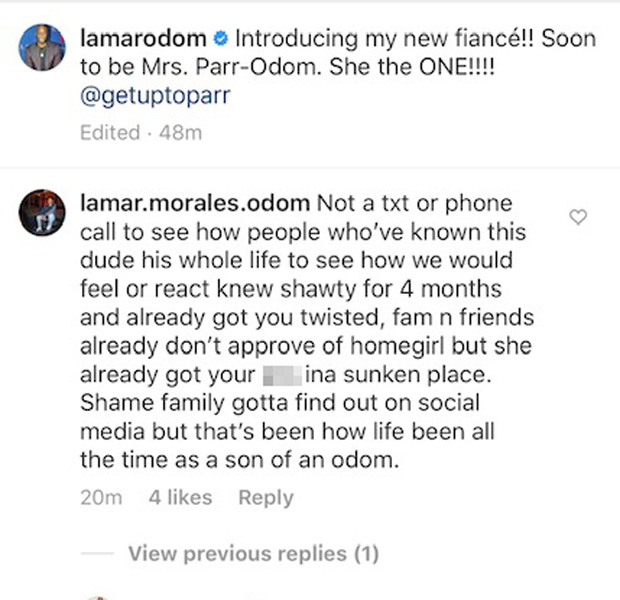 sincerely.sasa wrote in the comments, “OMG Congratulations, Lamar! I’m so happy for you man! You got rid of the toxic folks, the users, and draggers. Now you’re getting up to parr!! Love it! #levelup,” while user wfadaolt added, “Really happy for you. It’s clear she is absolutely the kind of woman/friend/motivator/lover in your life. There’s a massive change in you and we all see it.”

Fan adeym excitedly wrote, “Woohooo you Goo Lamar!!! Im soo freaking happy for you!!! Congrats and may god continue blessing you !! So proud of you ♥️♥️♥️♥️🍾🍾💋🎉🎊🎊,” and yourstruly_muriel commented, “CONGRATULATIONS 🍾🎉 I’m so happy for y’all. Lamar and @getuptoparr Love it, Love it, LOVE IT 💞.” So while Lamar’s fans are so happy for him, from his son’s comment it sounds like his friends and family most decidedly are not down with his sudden engagement.