Gwen Stefani, 50, made sure she came dressed to impress at the PCA’s when she arrived on Sunday night for her big honor in a sleek Vera Wang gown that came equipped with a pair of stunning long black gloves (remember when Amal Clooney, 41, wore a white version of the gloves to the Golden Globes in 2015?) and thigh-high boots. The mother-of-three paired the look with a gorgeous necklace and earrings while also bringing her most handsome accessory, boyfriend Blake Shelton, 43, along for the ride. Gwen revealed to Giuliana Rancic, 45, that talks about her look started months ago!

The “Hollaback Girl” singer has dazzled millions with her eclectic style for many years, dating back to her early days in the legendary music group No Doubt. So it came as no surprise when E! decided to gift her with the Fashion Icon Award at this year’s PCA’s held at Barkar Hangar in Santa Monica, California. She follows in the footsteps of designer and former Spice Girls singer Victoria Beckham, 45, who won the coveted honor during the 2018 ceremony.

Fashion designer Jeremy Scott, 44, introduced Gwen, who he referred to as a “bada**, before she came on stage. “What? Wow this is hard to digest,” she said about winning the award before adding “I always loved fashion, it was one of those instinctual thing. So the fact that this is happening is hard to imagine right now because its what I do!” 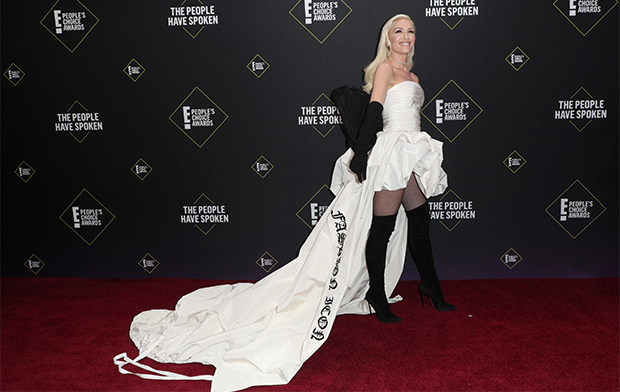 Gwen is no stranger to snatching trophies over her illustrious career. She’s taken home 2 Billboard Music Awards, 3 Grammy Awards and 4 MTV Video Music Awards for her musical efforts as a solo artist and with No Doubt. She’s also scored many honors in the fashion world, including her winning The Icon prize at the 2016 Glamour Women of the Year Awards. Clearly she has made a mark in more avenues than one. Congrats Gwen!