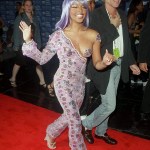 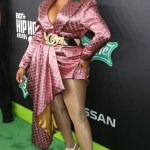 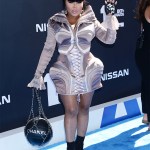 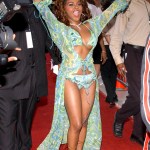 Lil Kim and her boyfriend, The Great put on a sultry display of PDA in a new video she shared to her Instagram Stories on Nov. 7. The pair cuddled up together and shared a few kisses in the clip, just a few days after she went public with her new romance!

Lil Kim and her CEO boyfriend are heating up fast! The rapper, 45, and the businessman, who goes by his stage name, The Great, got cozy in a new video she shared on Instagram, November 7. “That’s my baby right there,” Lil Kim said in the video, which showed her man sitting behind her as they lounged in front of a lit fire place.

In the clip, The Great leans up to kiss Kim, as he brushes her bronze colored hair away from her face. After a few sweet kisses, Kim compliments her man, but it’s unclear what exactly she says. “That’s your first time telling me baby,” The Great replies.

“What,” a surprised Kim says. “He play too much y’all. That’s the problem, he play too damn much,” she jokes as the two share a moment of laughter. When Kim turned on the camera, she and her new beau were already in mid-conversation, so the context behind their cute exchange is unknown.

#LilKim and her boo thang

We’re not quite sure when Lil Kim left the single club. However, she went public with her new relationship on November 4, when she tagged The Great in a video on Instagram. The clip showed him recording Kim as he surprised her with a diamond necklace with a photo of her late father surrounded by a circle of sparkling jewels. Kim was wearing the necklace in the above video.

Meanwhile, The Great has been sharing posts with Kim on his Instagram since late October. He uploaded a video of Migos rapper, Quavo performing in New York on October 27, while Kim sat next to his girlfriend, Saweetie. Just yesterday, November 7, The Great shared two photos of him and Kim at Access Hollywood Live, and gushed over the rapper in his caption.

“I never thought I would meet a woman that works as hard as me,” he wrote. “This beautiful soul and I are so much alike it’s scary.”