It’s Angelina Jolie like you’ve never seen her before! The actress, 44, was spotted on set of her new Marvel film, The Eternals as her Celestial superhero character, Thena. Angie, who is currently filming on the Canary Island of Fuerteventura, was photographed wearing a tight gold suit and a blonde wig on Tuesday. Other photos from the set showed her on the beach with costars, Gemma Chan and Brian Tyree Henry.

The set photos, despite the blurry quality, are the first photos in which fans are able to catch a glimpse of the costumes that will appear in the film. The Eternals is based off the Marvel Comics race of the same name that began in 1976. The highly anticipated picture is set millions of years in the past, and follows an alien race called The Celestials, who experiment on humans. In the midst of the latter, they create a race of immortal super humans known as The Eternals, along with a second villainous race, The Deviants.

Angelina and her costars were photographed on set right after she and Richard Madden, who also stars in the film, were reportedly forced to evacuate the set due to a bomb scare. Filming on the Marvel project came to a halt when members of the crew found an unidentified object nearby, various reports claimed. The Eternals is currently filming on an island that was previously used as a German military base during World War II. 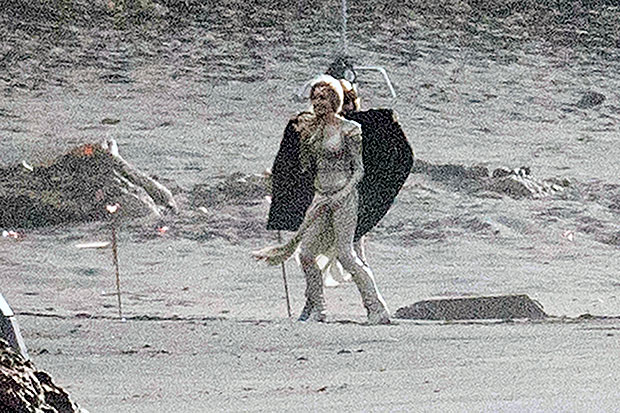 The Eternals marks Angelina’s first time stepping into the Marvel Cinematic Universe. News of her casting came on July 20 when she surprised fans at the official cast announcement during San Diego’s Comic Con. The Eternals will be released in theaters on November 6, 2020. The Marvel superhero movie also stars Selma Hayak, Kit Harington, Kumail Nanjiani,  Lauren Ridloff and Don Lee.