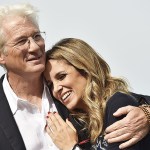 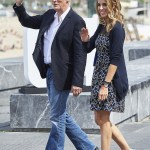 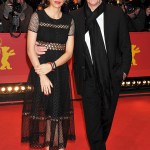 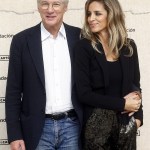 Again? So soon? Less than a year after Richard Gere and his young wife, Alejandra Silva, became parents to a beautiful baby boy, she’s reportedly pregnant with their second child together!

Whatever Richard Gere has in terms of genetics, science better bottle it because the Pretty Woman star is supposedly about to become a father – at age 70! He and his wife, Alejandra Silva, 36, are expecting their second child, according to Spanish publication Hola! Alejandra is reportedly three months pregnant, which is astounding since she and Richard welcomed their first baby together, Alexander, in February. HollywoodLife has reached out to Richard’s reps for comment on this and will update the post with any information when it’s made available.

Hola! was the publication that broke the news of Alexander’s birth in February and published exclusive photos of their May 2018 wedding, so there might be some fire to this smoke. Supposedly, the baby is due “next spring,” around the time that baby Alexander will celebrate his first birthday. Richard and Alejandra, a Spanish publicist, tied the knot in 2018 and announced their pregnancy in September of that year.

To share the news of their family, Richard enlisted the help of a close friend: the Dalai Lama. The couple posted a picture with the Buddhist leader placing his hand on her growing bump. “A very special moment just a few minutes ago. Getting blessings for our precious to come… We couldn’t announce it before telling HH Dalai Lama,” she captioned the now-deleted Instagram post.

Both Richard and Alejandra have children from previous relationships. She and her first husband, Govind Friedland, welcomed a son, Albert, in December 2012. Richard, on the other hand, has a 19-year-old son, Homer Gere, from his marriage to model/actress Carey Lowell. Richard and Carey split in 2013 after 11 years of marriage, which was finally settled in October 2016.

After marriages to Cindy Crawford and Carey Lowell, it seems third time’s the charm for Richard. At least, his third wife feels that she’s hit the jackpot. “I feel like in a real fairy tale, the luckiest woman in the world! Our love story is the sweetest, most romantic, and perfect dream I’ve ever had,” Alejandra told Hola! (via Google Translate.) “There is not a day that Richard does not mention how important I am to him … He is the most humble, sensitive, affectionate, attentive, funny, generous man … I have known.”